Recap / Futurama M 2 The Beast With A Billion Backs 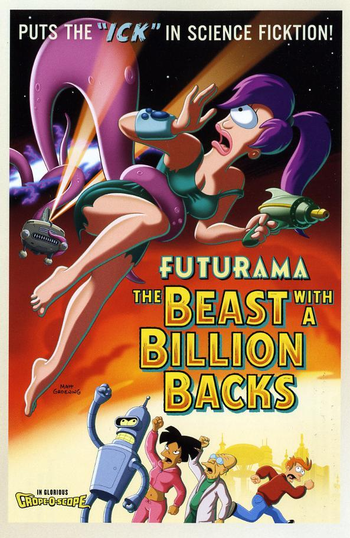 The Proud Result of Prison Labor

Professor Farnsworth tries to solve the mystery behind the interdimensional anomaly that's been seen in the sky since Bender's Big Score. Meanwhile, Fry dates a female police officer named Colleen (voiced by Brittany Murphy, in what would sadly be her last voiceover rolenote discounting her regular role as Luanne Platter on King of the Hill) who is in a polyamorous relationship with four other guys, Amy becomes Kif's fon-fon-ru, and Bender joins a secret society of robots that everyone else thinks isn't real.

Bender gives the Robot Devil his firstborn son in exchange for an army of the damned.

Example of:
Baby as Payment

Bender gives the Robot Devil his firstborn son in exchange for an army of the damned.