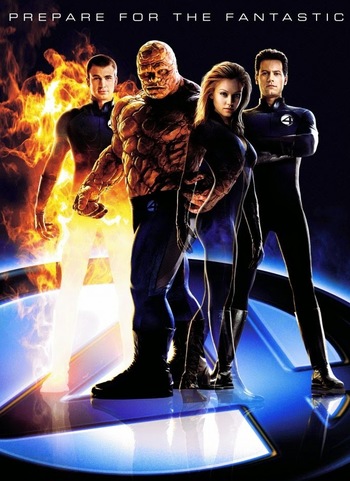 Susan Storm: You don't want to walk around on fire for the rest of your life, do you?
Johnny Storm: Is that a trick question?
Advertisement:

Ten years after the first Ashcan Copy adaptation in 1994, Constantin Films, still holding the movie rights, were confident that such a big project was possible.

Reed Richards, a brilliant but penniless physics researcher, and friend Ben Grimm seek out Richards' former MIT colleague-turned-Von Doom Industries CEO Victor Von Doom to invest in his project to research the arrival of a cosmic energy cloud that will pass near Earth. Von Doom, sensing a good investment, agrees and allows Richards the use of his space station to collect samples of the cloud. Accompanying the trio are Von Doom Industries employees Susan Storm, a genetic researcher (and Reed's old flame), and her younger brother, thrill-seeking ex-astronaut Johnny. However, during the course of the mission, a fatal miscalculation results in unsafe exposure to the effects of the cloud, leaving everyone on board with unpredictable symptoms.

It was followed by Fantastic Four: Rise of the Silver Surfer in June 2007.

Has a Character Sheet with characters from both movies.