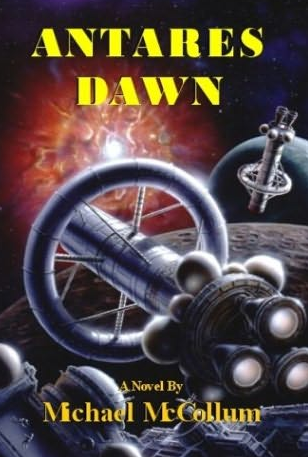 A trilogy of sci-fi novels by Michael McCollum dealing with humanity's war against a genocidal alien race.
Advertisement:

Central to the novels is the concept of "foldpoints". These natural stargates connect the stars and allow interstellar travel. The vast majority of stars have no foldpoints, and are therefore effectively out of reach. All human-colonised solar-systems have at least one. Generally speaking the more massive a star is, the more foldpoints will form around it. The novels focus mostly on the colony of Alta, which has been isolated for over a century after its system's single foldpoint disappears when the star Antares (previously a hub of human commerce thanks to its six foldpoints) goes supernova.

The first book, Antares Dawn, is set 125 years after the supernova. The nova shockwave has reached Alta. Theories regarding whether or not the foldpoint would restore itself are rendered moot when a crippled terrestrial warship running completely on autopilot limps through. Captain Richard Drake leads an expedition through, eventually discovering that the supernova also brought humanity into conflict with the genocidal Ryall. The nearest colony, Sandar, has reverted to a monarchy, has been in a state of continuous warfare for over a century, and has been cut off from Earth for the last 15 years. The Altans also get a chance to fight alongside the Sandarians when the Ryall attack.

The second novel, Antares Passage, takes place two years later. Alta and Sandar make an alliance and spend tons of money on radiation shields so they can brave the nova and reach Earth. On the way, they stumble onto a Ryall mining colony and discover a complete star chart of the Ryall Hegemony.

The final novel, Antares Victory, focuses on the human assault on the central Ryall system of Spica, and their subsequent struggle to hold it against counterattacks. It ends with the humans trying to convince the Ryall to give up their attempts at genocide.

The series is notable for its faithful obedience of the laws of physics. Lasers are invisible (except in one battle where the Ryall unleash a cloud of oxygen onto the battlefield), ships have to deal with the effects of high acceleration, and destroyed spaceships are reduced to hunks of metal.