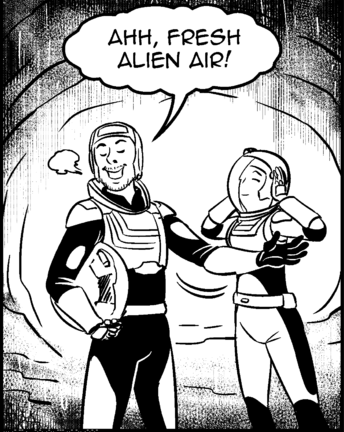 I love the smell of methane in the morning.
R2: Obviously the air is highly caustic and poisonous.
Obi-Wan: Apparently not.
— Darths & Droids
Advertisement:

In Speculative Fiction, it is far too often the case that writers do not take into account the fact that the differences between terrestrial species and their alien counterparts would run deeper than appearance alone. Given that alien species would have evolved in environments vastly different to terrestrial ones, contending with different atmospheric conditions, different levels of background and cosmic radiation, different soil conditions, different pathogens and parasites, and so on, it is patently unlikely that any aspect of their biology would be directly compatible with their terrestrial counterparts. Aliens in speculative fiction are usually depicted less as properly alien creatures and more like humans from another country, and alien animals are merely exotic species from a different climate.

This, then, means that you will often find one or more of the following in speculative fiction:

Similarly, some people claim that most lifeforms in the universe would be fundamentally compatible with each other because they would be formed from the same basic chemicals. Science is currently undetermined on who's right - on one hand, carbon's properties mean it's more likely for carbon atoms to combine with other elements and form more complex life forms; on the other hand, with how many other elements exist there are way more chances for those elements to combine over carbon. Regardless even if the aliens we encounter are carbon-based that doesn't mean they'll be compatible: even here on Earth most species cannot reproduce with each other (and even when they can, the offspring are usually sterile) and can't eat the same food (chocolate, as an example, is poisonous to many species).

This is one of the problems to watch out for in How to Invade an Alien Planet. A technological counterpart is Plug 'n' Play Technology. If different species (including, for example, humans and aliens) are shown reacting to drugs in exactly the same way despite biochemical barriers, see One Dose Fits All.