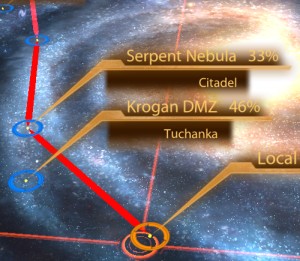 Around the galaxy in eighty seconds.
"We came through that big round thing."
— John Sheppard, Stargate Atlantis
Advertisement:

Simply put, there are lots of "islands of habitability", and conventional travel between them, if possible at all, is time-consuming, expensive, and generally not attempted unless there is absolutely no other choice. However, there is a set of gates or jump points connecting them together, allowing for near-instantaneous travel.

This results in what can be called a "graph universe": the connected islands/communities/planets are vertices and the portal links are edges, and the rationality of travel between them depends not on the distance, but on the existence of a known link between them.

In science-fiction versions, it is common for portal transits to induce disorientation, hallucinations, or nausea which make starship crews temporarily extra-vulnerable immediately after transit.

Considering that it would take thousands if not millions of years to set up an interstellar Portal Network without any other means of Faster-Than-Light Travel, it is not uncommon for such things to have been made by the Precursors, in which case the gates are usually (though not always) Lost Technology. Alternatively, it is sometimes hybridized with hyperdrive — in such settings, starships carry their own FTL equipment but can only use it at very specific naturally occurring "Jump Points" in space defined by gravitation intersections or some other mathy thing that's too complicated to explain. Sometimes FTL ships and portals co-exist, where the latter is a one-time investment to save everyone a lot of time and fuel to act as an express lane.

As these provide both a relatively plausible form of Casual Interstellar Travel and justifies the idea that Space Is an Ocean enough to permit choke point naval battles, Portal Networks are common throughout all but the hardest varieties of Science Fiction, which disallow faster-than-light travel altogether. They are a convenient means of providing simplified game mechanics and controlling where the player can go, and so are common in both video and tabletop games. In addition they allow writers to avoid making embarrassing scaling errors, if done right.

If the network has a radial structure — most or all linking pathways originate from the same point — this point is a Portal Crossroad World.

Sub-Trope of Teleportation with Drawbacks, since this is a specific drawback, by restricting destination and origins. Cool Gate, is the trope for structures that allow teleportation by travelling through them, which is used for most examples of this. Hyperspace Lanes, is for when Faster Than Light travel is restricted to certain paths. For a videogame sort-of-equivalent, see Warp Whistle. A Portal Door may be used as the medium of transport. If the portals themselves are limited in the range they can cover and that's why long trips require multiple jumps, you may be looking at a Multistage Teleport.