Literature / Kings of the Wyld 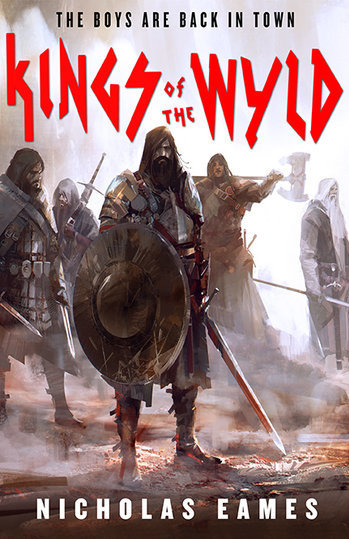 "It's time to get the band back together."
— Golden Gabe
Advertisement:

Clay Cooper was once a member of the band Saga, one of the most famous bands of mercenaries in history. He toured the world with his friends, taking gigs to clear out monsters that threatened villages, or even venturing into the Heartwyld itself, the most dangerous place in the world. For ten years, they were giants, the top of the game.

Now, nineteen years later, Clay Cooper is retired with his wife and daughter, working as a town guard for his tiny village. Until one day Gabriel, Saga's old frontman, comes calling with yet another attempt to get the band back together—but this one is important. The distant city of Castia is under siege from the largest horde of monsters seen in hundreds of years, and Gabe's daughter Rose is trapped there, as she had been doing mercenary work in the area. Gabe wants Clay's help to get their old friends back together and save Rose.

There are some problems, though. Gabe sold his priceless sword; Moog, their wizard, is busy trying to find a cure for an incurable disease; Matrick the Thief is king of a country; and Ganelon, their finest, fiercest warrior, is locked in a magical prison. Just getting the band back together will be a miracle in and of itself. Then five old men will have to cross a thousand miles of the most dangerously enchanted woods in the world, to fight a horde of countless monsters, all to rescue a girl who is almost certainly already dead.

But if it were easy, there would be no glory.

Kings of the Wyld is the first entry in Nicholas Eames The Band series, followed by Bloody Rose in 2018 and a third book, Outlaw Empire set for the 2020s.