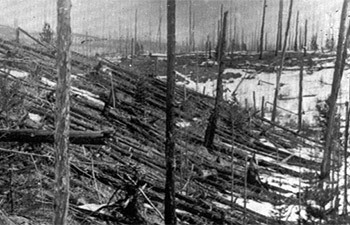 "Perhaps the earliest widely-held theory for the Tunguska explosion was that the world was about to end. As the minutes passed, this theory was dropped in favour of other, less final theories, until today one is hard-pressed to find anyone who truly believes the world ended on the morning of 30 June 1908..."
— Kevin Zahnle, Nature, "Leaving No Stone Unturned"
Advertisement:

On 30 June 1908 (17 June, going by the Julian calendar still in use in Russia at the time), shortly after 7 a.m., residents of the hills northwest of Lake Baikal in Siberia saw a light in the sky, nearly as bright as the sun. This was followed by a flash of light, a sound like artillery fire, and a shockwave that knocked people off their feet and shattered windows. Something had exploded in the forest near the Podkamennaya Tunguska River, with energy equivalent to 10-15 megatons of TNT (However, some recent experiments

indicate that the blast may have actually been smaller, at "only" 3-5 megatons).

In 1921, Russian mineralogist Leonid Kulik concluded from eyewitness accounts that the explosion was from a meteorite impact. He led an expedition to the Tunguska region, hoping to find and salvage the meteor itself. Instead, they found a 50 kilometer-wide region of scorched and felled trees, with no impact crater to be found.

has been suggested to have an impact origin. It's absent from 19th century maps (albeit rather inaccurate ones) and appears only from 1929 onward, it has unusual shape, and it's only 8 km from the epicenter. But this hypothesis requires further investigation. As of 2013 the meteorite still hasn't been found.

Today, most scientists agree that The Tunguska Event was caused by a meteoroid exploding in mid-air rather than directly impacting. While such air-bursts are common at higher altitudes, they are rarely close enough to Earth's surface to cause damage. There's some debate over whether the exploding space rock came from a comet (which would explain lack of a solid meteorite body) or an asteroid.

Other less credible, but more interesting, theories suggest that the event was caused by: a deuterium-rich meteorite causing an all-natural thermonuclear explosion; a chunk of antimatter; a miniature black hole passing through the Earth; an alien spacecraft crashing or discharging some kind of superweapon; psychic experiments or magic rituals gone wrong; or a test run of Nikola Tesla's Death Ray. It has also been noted that recent explosions in Siberia, leaving impressive craters and downed trees, are due to pockets of methane being released from defrosting tundra; global warming is speeding up this process and creating another interesting consequence. It has been speculated the Tunguska Event might have been due to a really big build-up of subterranean methane that found its way out.

. Thanks to the many Russian motorists who use dashcams (to settle traffic and speeding disputes), the Chelyabinsk Superbolide was no mystery, and coincidentally was the largest explosion from an extraterrestrial source since... the Tunguska Event.

In any case, as the sheer number of examples show below, the Tunguska Event is your go-to mysterious explosion for any fiction writer who wants to put that sprinkling of historicity on their work.

Sub-Trope of Historical In-Joke and Real Event, Fictional Cause, and one of the Stock Unsolved Mysteries. Compare Roswell That Ends Well and Came from the Sky.