Literature / The Mystery of Urulgan 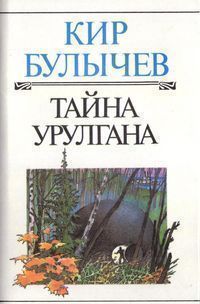 The Mystery of Urulgan is a 1991 Science Fiction Action-Adventure novel by Kir Bulychev. In pre-revolutionary Siberia, an English explorer has vanished without a trace, so his daughter Veronica Smith goes there to search for him. She is joined by her fiance Douglas Robertson, his Chinese manservant, a merchant, and an exiled revolutionary. The small band travels down the Lena River, and reaches the place where the Urulgan meteorite fell to the Earth. The travelers discover that frozen inside the meteorite is an alien spaceship. The alien hopes the humans are civilized, and shows them his fantastically advanced technology. But this makes the people behave at their worst, and they try to kill the alien. He eventually escapes from Earth, possessed by a hatred of humanity.

This book signalled the increasing cynicism of Bulychev, who was no longer the same man who had written of a beautiful tomorrow in Alice, Girl from the Future.