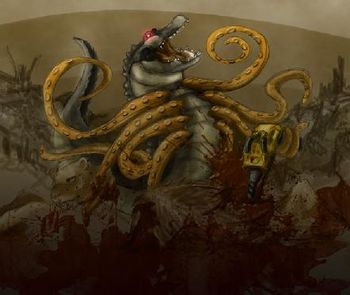 It is a sunny day in the ruins of Terminus City, and Croctopus is building a boat.
It is a timeless struggle, a battle that has been fought countless times: the elemental conflict of crocodile with octopus legs and power tools versus giant sturgeon stuck onto a tank with a sword and a jet engine for a voice.
— Zoofights, in a nutshell.
Advertisement:

Zoofights is an interactive story series hosted on the Something Awful forums, led primarily by the user Major Failure. Each "arc" of Zoofights (there have been six as of this writing) is about large and deadly animals facing one another in a blood sport that is both futuristic and old-timey (Zoofights 3, for example, took place in the late 1800s despite the extremely advanced technology present. They just wanted to have all the bystanders wearing monocles and top hats).

While it includes the odd scripted event, the outcome of Zoofights is not up to Major Failure or any of the people who actually write it. Rather, before each match, the readers are encouraged to vote for their winner, and their votes carry more weight if they come with fan art or detailed explanations of their choice (Simply saying "I vote for Steamcrab" results in your vote just being ignored. You need a reason).

Staples of the series include mutant animals, animals with parts of other animals attached, heavily mechanized animals, and one entrant growing so powerful that the remaining normal ones must join forces to defeat it.

The series has proved to be a winning formula, spawning lots of fan art (mostly drawings, but everything from plush toys to clay sculptures have been made) and a devoted community of fans further adding to the experience by role-playing as spectators.

Due to the fact that it is a Something Awful forum attraction, the first two Zoofights cannot be viewed by the average Internet denizen due to being too old, therefore requiring a Something Awful Archives account (which costs money). The third

is available for public viewing regardless of whether you have a Something Awful forum account, as is the fifth one

requires the Archives account upgrade. Fortunately, all of the Zoofights story arcs save the second are currently hosted on the Zoofights website

, and the (now over) Zoofights 6 can be seen here

, since it's thread of Something Awful cannot be seen by non-members currently.

The Eighties-themed 6th series began on May 1st, 2011, and ended six-and-a-half months later.

changed its format from an annual tournament to a series of "What If?" fights.