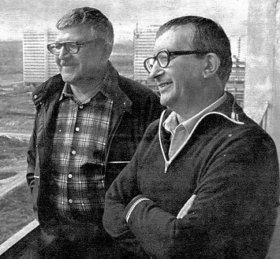 Their later books were very philosophical and subversive: many were heavily censored, others were banned. The banned books were printed unofficially (a practice known as samizdat

and naturally a crime in the Soviet Union) and passed from hand to hand as subversive material. Averting True Art Is Incomprehensible, these books were read by people of all ages, inspired generations of idealists and are cited as an influence by prominent Russian intellectuals.

Unfortunately, English translations are few, lacking in quality and out of print. The fact that they are based on Soviet-era censored versions of the works doesn't help. Unfortunately, the chances of getting new English translations is close to nil since Boris Strugatsky refused to take the original Russian texts off his website (something which is apparently a prerequisite for having his work translated in the West). Movie adaptations are not quite as scarce, but suffer from horrible Adaptation Decay. The most famous adaptation is that of Piknik na obochine, translated into English as "Roadside Picnic", which became a film under the title Stalker. (The film, in turn, would inspire a video game).

Arkady Strugatsky died on October 12, 1991, ending the collaboration. Boris Strugatsky published two solo novels (neither translated to English) before his death on November 19, 2012. He was quoted to describe solo writing as "sawing a log with a two-man saw, only alone". After Boris' death, a square in St. Petersburg where he resided during his final years was named after the brothers.

Works by the Strugatsky brothers include:

Works by Boris Strugatsky include:

The Time of Apprentices (Russian: "Время учеников") is a massive collaborative Strugatsky fanfiction project that began in 1991 and was sanctioned by Boris Strugatsky. Its participants, aspiring Russian science-fiction authors (the eponymous "apprentices" of the Strugatsky brothers), write short stories and novellas based on the brothers' works, which are then published in anthologies. Four volumes have been published as of 2011. Sergey Lukyanenko wrote two short stories in the first and second volumes, respectively.