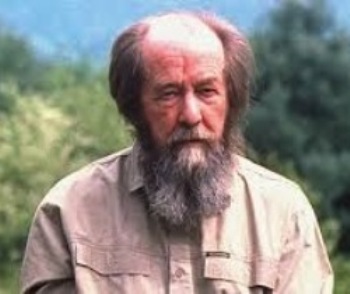 Aleksandr Isayevich Solzhenitsyn (11 December 1918 – 3 August 2008) was a Russian author, activist, and philosopher best known as the author of The Gulag Archipelago, a book criticizing Stalinist Russia. It resulted in him being banned from the USSR in 1974 and brought him world fame.

He served in the Red Army during World War II, and he was arrested in 1945 for criticizing Stalin in personal letters. He was sentenced to eight years in The Gulag. In the more liberal climate of Khrushchev's rule, he was allowed to publish a novel inspired by his experiences, One Day in the Life of Ivan Denisovich. The book was the first major account in the USSR of Stalinist repression and caused a sensation both at home and in the West.

After Khrushchev was deposed in 1964, culture in the Soviet Union became more repressive. Solzhenitsyn continued to work secretly on his comprehensive account on the gulags, The Gulag Archipelago. He would memorise a lot of his works in case the drafts were seized by the KGB. The seizure of The Gulag Archipelago (and suicide of the person who had it in her possession as a result of her arrest) forced him into early publication in the West. After this, he was exiled from the Soviet Union in 1974. He won the Nobel Prize in Literature in 1970, although he didn't collect it until 1974.

After his expulsion, Solzhenitsyn emigrated to the United States, where he lived in the small village of Cavendish in Vermont. He returned to Russia in 1994 and lived there until his death.

His career contains several striking comparisons to that of Fyodor Dostoevsky, particularly his embrace of Christianity after imprisonment in Siberia. He's a highly controversial figure among Russian patriots: many of them denounce him as one of the architects of the Soviet collapse and a "traitor and liar" (helped by the fact that his name is based on the word stem "to lie"), but some sympathize with his conservative political views, though in the West criticism usually focuses on his antisemitism, his critique of "democracy" (which he claimed led to the rise of the Russian oligarchs), and his romanticized and simplistic view of Russia's past. To put it simply, the man was just as enamored with Tsarism as he was hateful of Communism. He was also very distrustful of the democratic, free-market Western "model".

His most famous works are: