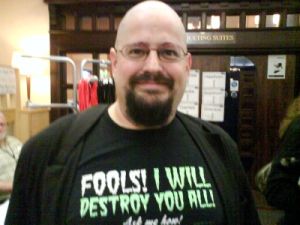 Charles David George Stross (born 18 October 1964) is a British Speculative Fiction author with a bent for Post-Cyberpunk work dealing with posthumanism and The Singularity, but who also has a vast array of other fiction out there. Early in his career, he invented several iconic Dungeons & Dragons monsters, including the Death Knight, githyanki and githzerai, and slaadi. He's also on record

as being responsible for bringing Footnote Fever to alt.fan.pratchett.

Works by Charles Stross with a page on this wiki: