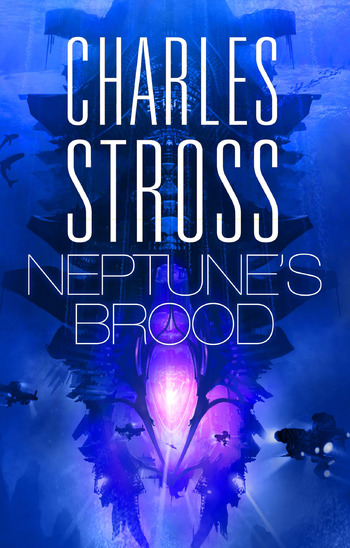 Neptune's Brood and its prequel Saturn's Children, are a pair of science fiction novels by Charles Stross, set in a universe where humanity has gone extinct and our robot descendants are the dominant civilization. There is a story, "Bit Rot", which bridges the gap between the two novels. It can be read here

The story is set some 5000 years after the events of Saturn's Children and follows a mild-mannered "metahuman" named Krina as she searches for her sister on the water world of Shin-Tethys. Along the way she is abducted - then hired - by Space Pirates, stalked by a Doppelgänger assassin, and unravels the complex financial cons that permeate the interstellar economy. All the while she holds her own secrets about the "Atlantis Carnet", the key to either the greatest treasure in the galaxy or its greatest scam.