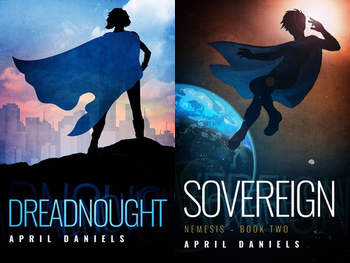 Nemesis is a series of superhero novels by April Daniels.

Before dying Dreadnought, the world's greatest superhero, passes on his powers to a young closeted trans girl named Danny Tozer. As a byproduct of the transfer Danny is transformed into her ideal self, making it impossible to hide her gender anymore.

There are two published novels so far:

Not to be confused with the Agatha Christie novel Nemesis. Now has a character sheet!