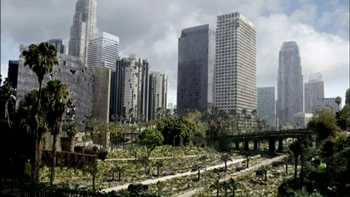 ♫In the jungle, the urban jungle, the lion sleeps tonight♫
"Mankind, the very species which I've been chronicling from its terrestrial infancy to its domination of the galaxies, is extinct. All of the beings which you saw on the preceding pages; from the lowly Worm to the wind-riding Sail People, from the megalomaniac Gravital to the ultimate Galactic citizens, lie a billion years dead. We are only beginning to piece the story together. What you read was our best approximation of the truth. Why did they disappear? Perhaps it was a final, unimaginable war of annihilation, one that transcended the very meaning of conflict. Perhaps it was a gradual break-up of the united galaxies, and every race facing their private end slowly afterwards. Or perhaps, the wildest theories suggest, it was a mass migration to another plane of existence. A journey into somewhere, sometime, something else. But the bottom line is; we honestly don't know."
— The Author, All Tomorrows
Advertisement:

Humanity is extinct, leaving only legends behind.

Local residents Homo sapiens sapiens were reported dead in their home planet on Stardate 2814.7 due to unconfirmed causes. Witnesses don't agree on the cause of the deaths; some say it was a domestic dispute gone badly wrong, others that they were killed during a violent home burglary or murdered by their children, or were blindsided by a wayward object colliding with their home, or of course they may have been careless enough to cause themselves an accident like burning, flooding, freezing, or starving, while an elderly species in the Vega system assures this publication they ascended to a higher plane of existence. Our sources however have confirmed that humanity is no longer active as a species, though speculation lingers on the existence of a lone survivor left to ponder their fate.

Humanity was born in The Time of Mythsnote The orphanage in which they grew up burned down, making independent verification impossible. and made their residence on the third planet in the Sol system, Orion Arm, Milky Way Galaxy. Growing up, they created various technological marvels and were an active resident in the cosmos; some even say they were the center of cosmic life. Humanity's former enemies, currently residing in a can, suspect their death may be due to growing overly proud of their achievements.

They will be remembered for their philanthropic work as Precursors, being prolific creators of not-yet-Lost Technology, stopping several galactic warsnote or possibly starting them, records are hazy and being all-around special. However, marring that legacy are allegations of being neglectful and even abusive. Already, a ragtag bunch of young space-faring species in the Orion neighborhood can be seen to dare each other to see who will step closest to "Creepy" Old Mannity's Oort cloud.

Surviving humanity are the species they uplifted to sapience, various models of robots still doing the tasks they were designed for despite it no longer serving any purpose, and approximately forty-two genetically engineered sub-species (including a few mutants), all currently contesting the title of "Heirs of Humanity". Among humanity's children, there is a widespread range of feelings towards their death. Some assure us they are overwhelmed with sadness, and will mourn until the stars go out. Others, including neighboring friendly aliens in the Omicron system, have pledged their intention to give humanity a "second chance" and resurrect all humans and/or reclone them back into existence via undisclosed means. Some have expressed joy at the death of humanity, and declared their intention to work against any resurrection. A few plan to take up the family business and create their own civilization. Some, who don't mind speaking ill of the dead, will dismiss humanity as a race of bastards, and a few even want to remember the crimes of humanity with a posthumous trial. Speculation on whether any of these child species can avoid the flaws which killed their parents ran rampant among those interviewees.

The funeral reception will be held in the Galactic Core on Stardate 2815.3, and burial in the Derelict Graveyard later that galactic rotation.