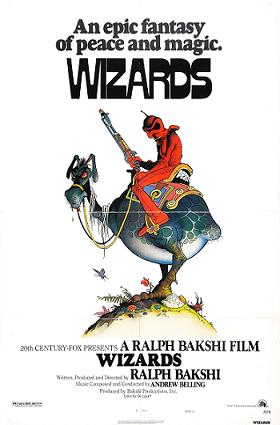 "They killed Fritz!"
— Max, on the death of another soldier named Fritz
Advertisement:

Wizards is a 1977 animated Science Fantasy film by Ralph Bakshi. It takes place in what is basically a Standard Fantasy Setting, except it's actually Earth way, way, waaaaay After the End. It tells the story of a war between an army of nuclear mutants (former humans) and a coalition of humans and various fantasy races (who predated the existence of humans, their descendants, but only emerged from isolation after the catastrophe). Each group is led by one of the two titular Wizards, the brothers Blackwolf (the evil one) and Avatar (the good one). Can the swords, bows, and magic of the fantasy folk defend against the technology-based weapons — and propaganda — of the past?

Notable for featuring the early voice work of Mark Hamill in his very first film role.

In late 2016, Ralph announced a new project of his called Short Thoughts, three one-minute shorts inspired by poetry vignettes from his previous films. One of the shorts is planned to be a follow-up to Wizards, starring Max and Fritz.

Not to be confused with The Wizard and has nothing to do with the Tales of Arcadia TV show Wizards (2020).