I Am Not Spock 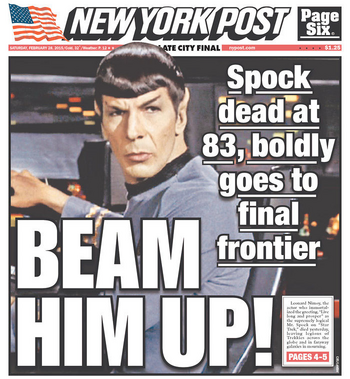 RIP Spock
2230-2015
"How many times have I told you not to call me 'Urkel'?! My name is Jaleel White! Urkel was a character I played when I was a child!"
— Jaleel White (played by himself), Big Fat Liar
Advertisement:

One of the most severe forms of typecasting, in which an actor or actress is not only defined as a certain character archetype, but in a specific role.

This is most certainly a double-edged sword, as it often guarantees that the performer will be famous for some time to come, but on the other hand, that role may end up stifling the performer's future acting prospects, as he or she may get rejected for other roles that may be seen as being against type. This can be tough on actors who, as artists, may have a strong desire to move on. As viewers and historians, it can sometimes be difficult to tell the difference between an actor who lucked out by getting one iconic role, and an actor whose career was hampered by an over-association with it.

Typecasting may have been more common in the early days of television as a holdover from motion pictures. It was common in the 1930s and '40s for a movie actor who was not a leading man or lady to make a career out of playing the same type of character. This seems to disproportionately happen to actors from sci-fi and fantasy works, possibly because some casting agencies may feel their credibility as a "serious" actor has been hurt by working on such shows.

For extra bad luck, the character may have a Catchphrase the actor will be asked to repeat incessantly, or even worse be a Phrase Catcher and have to endure hearing it yelled at them by every Loony Fan.

Named for the 1975 autobiography by none other than Leonard Nimoy. An autobiography that, incidentally, didn't actually say what everyone thought it said because of the title.

See also …But I Play One on TV and One Hit Wonder: Acting. Compare Adam Westing and Never Live It Down. Contrast I Am Not Leonard Nimoy. And see Contractual Purity for those trapped in kids' show wholesomeness. Finally, see Role Association for the Just For Fun version. Not to be confused with I Am Not Shazam. For the writer equivalent, see Author Usurpation.

Remember that Examples Are Not Recent when adding examples here.

Sorry Dennis Haysbert. You're totally Safe Drivers Save 40%. But at least he's in good hands.

Sorry Dennis Haysbert. You're totally Safe Drivers Save 40%. But at least he's in good hands.