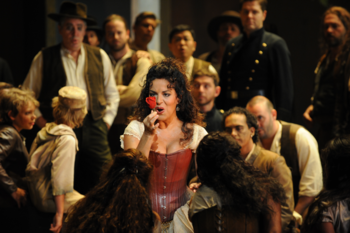 The titular femme fatale prepares to give her flower to Don José
L'amour est un oiseau rebelle
Que nul ne peut apprivoiser,
Et c'est bien en vain qu'on l'appelle,
S'il lui convient de refuser. click for translation
Love is a rebellious bird
That none can tame,
And it is utterly in vain to call it,
If it suits it to refuse.
— "Habanera"
Advertisement:

Carmen is Georges Bizet's classic opera in four acts set to a libretto by Henri Meilhac and Ludovic Halévy. First performed at the Opéra-Comique in Paris in 1875, it shocked and scandalized audiences, and the character of Carmen outraged many critics for being an "amoral seductress" and not a "woman of virtue". It was a huge failure upon release, and it wasn't revived until 1883, where it quickly became popular in France and abroad.

The opera tells the tragic story of a corporal, Don José, who deserts the army, his fiancée, and his morals when he falls for Carmen: a mysterious, seductive, and independent gypsy woman.

Modern reception has been much kinder to the opera, with much praise for Bizet's brilliance in melody, harmony, atmosphere, and orchestration. The score was amended significantly after Bizet's death, replacing the spoken dialogue with the traditional recitatives you hear today. Since then, it's become a staple in worldwide operatic repertoire, and has seen numerous recordings and productions.

Not to be confused with the world's greatest thief, though that Carmen does share a few similarities with this one and has had the opera factor into her Criminal Mind Games a couple of times.

Film adaptations are many, and date back to 1909. Some of the more famous include Otto Preminger's Carmen Jones (an all-black cast in 1950s North Carolina), and 1983 Spanish film Carmen (a dance troupe puts on an adaptation of Carmen while the characters also live out the story in real life, including the Downer Ending).

Example of:
If I Can't Have You