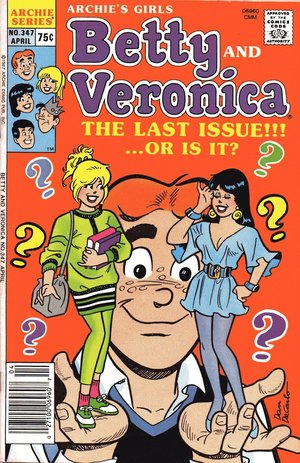 Don't get your hopes up.
"She wears short skirts, I wear t-shirts
She's cheer captain and I'm on the bleachers."
— Taylor Swift, "You Belong with Me"
Advertisement:

One of the most common types of Love Triangle, named after characters from Archie Comics, wherein the main character ("Archie") is caught between two love interests with drastically different personalities. "Betty" is the sweet, reliable, everyday Girl Next Door type (which could mean "kind of dull"), while "Veronica" is more alluring, exotic, and edgy, but has more of a mischievous or icy personality (which could mean "kind of a bitch"). This translates to their physical appearances; Betty will be pretty but modest in dress, while Veronica will be Ms. Fanservice in all her glory. As a rule, they will have different hair colors per the Blonde, Brunette, Redhead trope.

This trope is almost endlessly flexible. In a commonly-seen version, Betty is Archie's loyal comrade and usually his best friend, secretly pining for him while he (unaware of her feelings) is attracted only to Veronica, the sultry Ms. Unattainable who barely notices him. Since Betty wants Archie to be happy, she may even assist him in his pursuit of Veronica, even though we all know how much she wants him for herself. Another version begins with Archie already in a relationship with one of the girls when he starts to see the potential in the other: Veronica's excitement or Betty's stability. If an Arranged Marriage is involved, Betty is the girl the parents prefer and Veronica is the one they reject, especially if children are expected (because Betty is more likely to want them). When Archie meets Betty and Veronica at the same time — if they are sisters, for example — he will fall in Love at First Sight with Veronica and only notice Betty after she had time to grow on him (for instance, on his repeated visits to their parents' house to try to woo Veronica).

"Archie," "Betty," and "Veronica" can be any gender or orientation, though The Gentleman or the Scoundrel is a possible Spear Counterpart specific to the situation of a female Archie and two male suitors. Another male variant is Rich Suitor, Poor Suitor, with a rich but douchey Veronica and a poor but kindhearted Betty, or a wealthy but boring Betty and a spirited blue-collar Veronica (because nothing simplifies a Love Triangle like throwing money into the mix.)

Whom the hero will end up with varies according to medium, story, and the values of the time period and culture where the story was made. Traditionally, Betty stood a better chance, at least if the story had a Happy Ending, due to conforming to social standards: choosing Veronica would only lead the poor sap into ruin. Usually, the hero would spend the story chasing Veronica only to realize that Betty was The One — complete with a convenient "appreciate what you've got" or True Beauty Is on the Inside Aesop. (In extreme but fairly frequent cases, he would learn that Veronica was in fact his illegitimate half-sister.)

However, as the perception of "appropriate" sexual conduct has changed over time, it's more common for Veronica to have a happy ending too, if not with the main hero, then as part of a Beta Couple or Pair the Spares. Movies have traditionally favored Betty, but video games, comics, and TV shows (especially long runners) have played this trope for all its worth. When Archie is female, a more enticing and risky Veronica usually has the edge over a sweet and boring Betty, especially if the story is aimed at women, and if Veronica loses, you can bet the fanfic writers will race to fix that.

In case this wasn't complicated enough, sometimes a Third-Option Love Interest makes their presence known to shake things up even further.

Movies have lately come to a compromise with the Manic Pixie Dream Girl; cute and non-threatening, yet exciting and different. Video games with Multiple Endings get to Take a Third Option by letting the player choose who the hero ends up with. Comic book and TV show franchises tend to avoid definitive resolutions to prevent Continuity Lockout, so the question of whether Archie chooses Betty or Veronica will never truly be resolved.

Compare the admirable one and sexy one of the Four-Girl Ensemble as well as the wife and seductress of The Three Faces of Eve. Also compare Light Feminine and Dark Feminine (Betty and Veronica, respectively) and the Madonna–Whore Complex (ditto). In a Four-Temperament Ensemble, Betty is most likely people-oriented/emotionally available (sanguine, or phlegmatic), while Veronica is task-oriented/emotionally unavailable (melancholic or choleric). In the case of a Bust-Contrast Duo, Betty usually laments her lack of standing in that department, while Veronica flaunts hers.

Do be aware that fans like to exaggerate potential relationships; Shipping would not exist without it. As a result there are likely to be multiple instances of an Official Couple (vindicated by Word of God) that has some sort of Fanon-based "romantic rival" mirroring this trope. Even shows without such romantic entanglements in-universe can inspire Betty/Veronica debates amongst the Fandom; hence, Mary Ann/Ginger, Bailey/Jennifer, Janet/Chrissy, Velma/Daphne, etc.

Please avoid referring to characters as "the Betty" and "the Veronica" to someone else's "Archie" when referring to this trope, as it is not particularly helpful to those tropers who are not familiar enough with the characters in question to immediately extrapolate the implied relationships.