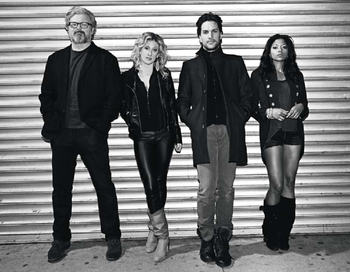 From left to right: Michael (John Ellison Conlee), Sara (Caissie Levy), Tom (Will Swenson), the Narrator (Rebecca Naomi Jones).
There’s always a killer
So logically, someone has to die.
We sing the murder ballad’s warning;
There but for the grace of God, go I...
— “Murder Ballad”
Advertisement:

Murder Ballad, with book and lyrics by Julia Jordan and music and lyrics by Juliana Nash, is a Sung-Through Musical that centers around a woman named Sara who grows dissatisfied with her Upper West Side life and pines for her rougher past, and a love triangle that — as the title would imply — ends in tragedy.

It had two Off-Broadway runs: one at Manhattan Theatre Club's Stage II in 2012 (which spawned a cast recording), then at the Union Square Theatre in 2013. The casting was the same in both productions, with the exception of Caissie Levy replacing Karen Olivo as Sara in the 2013 production.

Not to be confused with the song form or the Nick Cave album.