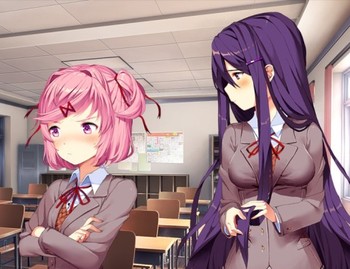 Typical chest sizes of the Tsundere and the Shrinking Violet.
"This is Max. She's got brown hair and she's got big boobs. And this is Caroline. She's got blonde hair and she's got small boobs. Even though they have their differences and they've got different sized boobs and different colored hair, they manage to work out their differences and become best friends or something. It's a comedic premise that you've seen before. And it's funny. It works."
— Spoof ad

An Always Female trope. Between two close female characters, one tends to be borderline-violent, and, while not necessarily flat, anxious about that aspect of her figure. The other, meanwhile, tends to be nicer, gentler, and more wholesome, while at the same time being far more... filled out and confident.

This often occurs in Japanese Media (anime and manga, video games and light/visual novels) where the size of the chest influenced their personalities. Here, there's a Tiny Tyrannical Tsundere (Shana Clone in Japanese Media) at play; when the more slender/petite girl acts abrasivenote either because she feels she's made fun of because of her size (whether it's true or not) or because that's a way for her to be more "imposing" or "assertive" despite her size, or because her body isn't "grown up" enough that she's written as having an attitude of a child/preteen, there's usually a more indulgent, and more 'feminine', character there to provide the beleaguered protagonist breathing room... though often at the expense of his ability to breathe. They usually have an image of either "caring big sister" or "doting young mother". The latter tends to fall victim to Hopeless Suitor, Cannot Spit It Out, or some variety of Like Brother and Sister, from the male's perspective.

Of course, there're exceptions where the busty girl not necessarily has a good attitude, like having a Big Breast Pride (making her arrogant) and dressing in Stripperiffic way to get more attention, as well the slender girl could be more gentle, probably being a defrosted Ice Queen or a Rei Ayanami Expy. But anyway, the contrast between the two girls and the obvious bust comparison is still there.

Related to Red Oni, Blue Oni (but with boobs), Betty and Veronica (when they have a common Love Interest), and Yuri Genre (where the main girls and Official Couple have this trope applied.) See also Light Feminine and Dark Feminine, where the contrast is in the general outfit instead the cup; both A-Cup Angst and Buxom Is Better, the main reason why these girls contrast; Bust Chart, where clear comparisons between cups are made; Boobs of Steel, if the busty girl is much more tomboyish and physical than the daintier petite girl; and Hair-Contrast Duo, where the contrast depends of the hair color, sometimes overlapping this trope (where usually the slender girl has a light hair color and the busty one has a darker color). Contrast Only One Female Mold.