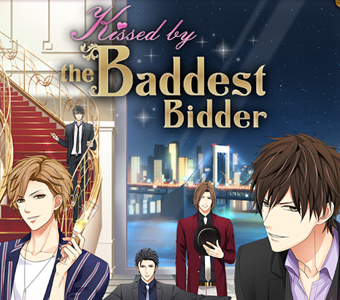 "I bought you."
Advertisement:

Kissed by the Baddest Bidder is a Romance Game Visual Novel by Voltage, Inc. for iOS and Android devices.

The protagonist works on the housekeeping staff of the Tres Spades, a luxury hotel and casino. When she accidentally stumbles into a secret VIP party, she ends up in much more trouble than she could have imagined: there's an illegal underworld auction going on in the lowest level of the hotel, and the last item up for sale is her.

After the winning bid is cast for the enormous sum of twenty million dollars, she ends up in the company of a Hong Kong gangster, a Gentleman Thief, a famous artist and fashion model, a police detective, and the billionaire owner of the Tres Spades himself. On the bright side, their intentions for her don't seem to be as horrifying as she feared... but on the other hand, they don't seem to be planning to just let her walk away, either.

In December 2017, Kissed by the Baddest Bidder was transferred into Voltage's Love 365 app.