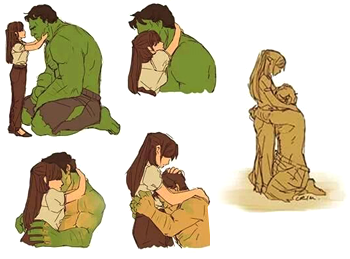 In fiction, the best way to calm down someone having a Super-Power Meltdown or having their Berserk Button pressed is to hug them, regardless of how much danger the hugger puts themselves in to get to the huggee. Often overlaps with the "I Know You're in There Somewhere" Fight, and sometimes counts as a Ship Tease between the involved characters. Often serves something of a dual purpose, in some cases not only is the person trying to use The Power of Love, they're also trying to pin their arms down so their rampage will end.

These days it's subverted almost as often as it's played straight, usually in the form of the hugger being stabbed somehow by the huggee, though it's rarely fatal. Just as often, expect to see Interrupted Cooldown Hug stop the hugger before the calming finishes.

A common tactic of the Cuddle Bug. See also Kill Me Now, or Forever Stay Your Hand and Care-Bear Stare, for when the hug is less literal. Compare "Shut Up" Kiss, its more romantic Sister Trope. The Living Emotional Crutch may act as an ambulatory Cooldown Hug. This trope will often be used by an All-Loving Hero, Nice Guy, or Morality Pet to prevent an Anti-Hero from going towards a much darker path. Tender Tears may often follow as well.

While having an engrossing dinner with Count Bozes' family one dinner, she is reminded of her own family who died back in her home dimension.

Example of:
You Remind Me of X

While having an engrossing dinner with Count Bozes' family one dinner, she is reminded of her own family who died back in her home dimension.