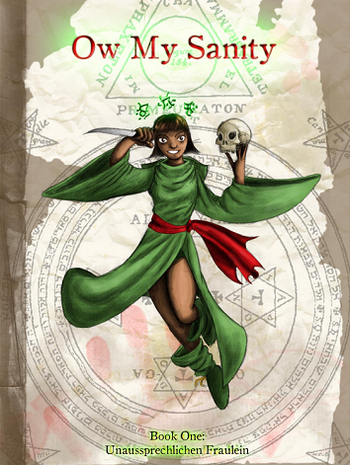 Down they descended and created bodies, taking the semblance of women as their own
"Yeah, okay, hold on a second. Don't get your tentacles in a knot."
— David Bartlett, in response to a Cosmic Horror asking him for a dollar.
Advertisement:

is a webcomic by Adam J. Thaxton. It's a Lovecraftian Magical Girlfriend Deconstruction, or as the author put it

, "stabbing the magical girlfriend genre with a rusty chainsaw". In other words, Ah! My Goddess meets H. P. Lovecraft.

The main character is an art student at Miskatonic University named David Bartlett, whose life sucks. One evening he comes home to find his dorm-mates performing some sort of cultish ritual. Hilarity Ensues, if you find the cult's hideous demise and getting kissed by an Eldritch Abomination to be hilarious.

See Nyaruko: Crawling with Love! for a more lighthearted and comedic take on the same concept.

so the author can work on other projects. Thankfully, as of June 2017, Thaxton seems to be laying the groundwork to finish Book Twelve.

Ow, my sanity contains examples of: