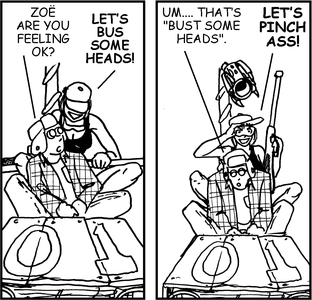 Whatever they're about to do, she's burned up for it.
Omi: He who is to be laughing last, laughs most loudly!
Raimundo: What Omi did to that sentence is what we're going to do to you!
— Xiaolin Showdown
Advertisement:

Beyond simple language structure are the aspects of figurative language: idioms, metaphors, similes, and other things that go beyond exact word meanings in a sentence. This trope is when a character will screw up such terms. This can range from using the wrong word in a term, to getting the whole meaning wrong.

The three most common causes are when a character is a non-native speaker of a language (if not an outright Funny Foreigner), is very Literal-Minded, or came from Cloudcuckooland.

This is usually Played for Laughs. A Threat Backfire is a possible result of this.

This can even happen when the non-native speaker tries to use idioms from that character's language, and it loses its meaning in the translation.

In reality, it is not unusual for this to be caused by literal translation from a known language, such as "having one's ass circled in noodles" (though, simple misunderstandings are also a frequent cause of this trope). But in TV Land, it's more often done by taking an existing expression from a language/culture different from the character's and replacing its words with synonyms from the same language, something highly improbable in real life, but is excused due to Rule of Funny.

The misspeaker isn't always the sole butt of the joke, though; often, such gags highlight how ridiculous and/or arbitrary the idioms are in the first place. Why can something be "a piece of cake" or "as easy as pie", but vice versa sounds utterly ridiculous?

A Sister Trope to Literal Metaphor (where an unlikely event sounds like a mangled metaphor).

Compare Mixed Metaphor, Buffy Speak, Malaproper, Expospeak Gag, Sidetracked by the Analogy, [Popular Saying], But..., and Either "World Domination", or Something About Bananas.

Not to be confused with Weapons-Grade Vocabulary, though both may seem to be physically painful at times.