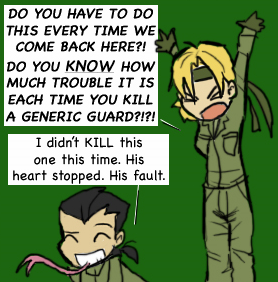 is a Metal Gear webcomic by Inonibird. It chronicles the adventures of the Cobra Unit, Metal Gear Solid 3's Quirky Miniboss Squad, during World War II. Wait, why does this concept seem familiar? Has not been updated since February, 2010.
Advertisement:

Has nothing to do with the snake-themed terrorists of yore.

The Cobra Days contains examples of: