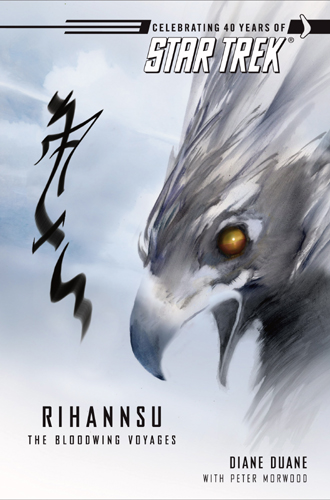 A series of popular Star Trek novels by Diane Duane, focusing on the Romulans, or as they call themselves, the Rihannsu. The books fleshed out Rihannsu culture and history in some detail—and in a quite different direction than what ended up becoming canon.

Following the disappearance of several Vulcan-crewed ships along the Romulan Neutral Zone, Captain James T. Kirk of the Starship Enterprise is on patrol when he is contacted by a Romulan naval officer, Commander Ael i-Mhiessan t'Rllaillieu, whom he's fought before. Faced with orders to carry out a war plan against the Federation which she considers dishonorable, she has chosen to defect to the Federation with her crew instead, and hopes to get Kirk's help to foil the plan.

The first four books were re-released in Omnibus form as The Bloodwing Voyages, with some minor Orwellian Retcons to clean up internal continuity and with books three and four merged back together. While some of the events of this series were Outdated by Canon by later developments in the live-action canon* In particular the details given in The Romulan Way of the Romulans' First Contact with humanity were overwritten by ENT: "Minefield", and thus the subsequent relaunch took the Earth-Romulan War in a completely different direction. Also, per Star Trek: Nemesis Remus is a barren, Tidally Locked Planet and the Remans are a different species, whereas in this series the Remans are Romulans and Remus is mostly an agri-world., much of the background worldbuilding done in this series was borrowed by the writing team of Star Trek Online, and the later showrunners on Star Trek: Enterprise did apparently really like the novels and wanted to try and bring the show-Roms and novel Rihannsu closer... in the seasons that ended up getting canned.

Tropes in the Rihannsu novels include: