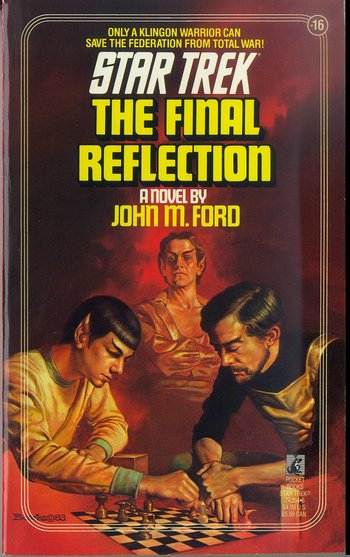 The Final Reflection is a 1984 novel in the Star Trek Expanded Universe, written by John M. Ford.
Advertisement:

In the prologue, Captain Kirk notices odd behaviour in his crew returning from shore leave. When he asks Dr McCoy for an explanation, McCoy hands him a book...

The Final Reflection is a historical novel, recounting events of forty years earlier, at a time of crisis for the Federation. Its hero is a bold and intelligent officer who rises from obscure origins to captain a starship, and finds himself the right man at the right time to save the Federation from destruction.

His name is Krenn, and he is a Klingon.