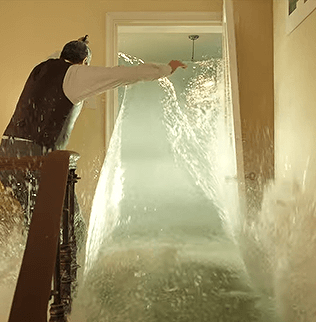 In a wacky comedy, the water level's rising inside a locked room, and usually, somebody is trapped in there. An unsuspecting person opens the door, and gets the unwelcome surprise of a massive flood pouring out, knocking them right over.

In Real Life, the water would usually just leak out at the crack at the bottom of the door, though it could be blocked up. Often the volume of water is so great that the weight should rip it off the hinges, or cause the floor to collapse, both of which would also cause the water to leak out as well.

Compare Exploding Closet, where there's a pile of solid objects on the other side of the door. Exploding Fish Tanks is another variant. May involve a Man-Made House Flood.