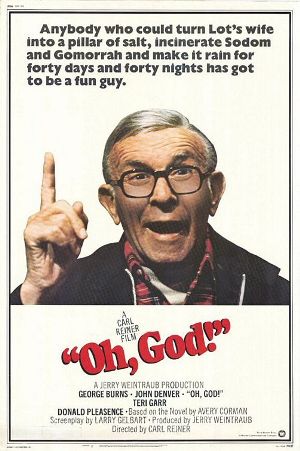 Morgan Freeman? Nice kid.
"The last miracle I did was the 1969 Mets. Before that, I think you have to go back to the Red Sea."
— God
Advertisement:

A series of comedy films starring George Burns as God.

The first film, Oh, God! (1977), was directed by Carl Reiner and adapted by screenwriter Larry Gelbart from a novel of the same name by Avery Corman. John Denver plays Jerry Landers, an assistant manager at a supermarket who is chosen by God to spread His message. Though reluctant at first, Jerry eventually accepts his calling, although his efforts strain his marriage, endanger his job, and put him in the path of a popular televangelist. The film briefly ended the reign of Star Wars at the top of the U.S. box office charts in October 1977, and even earned Gelbart an Academy Award nomination for Best Adapted Screenplay.

The sequel, Oh, God! Book II (1980), essentially recycled the plot of the first, but with eleven-year-old Tracy Richards (Louanne Sirota) as His messenger. Tracy is inspired to start a "Think God" campaign at her school, but her divorced parents think she's crazy and plot to halt her mission.

Recognizing that the appeal of the series was George Burns himself, the third movie, Oh, God! You Devil (1984), has him play both God and Satan. In a straightforward Deal with the Devil plot, a struggling musician named Bobby Shelton (Ted Wass) sells his soul to the Devil in exchange for fame and fortune. Trapped by Satan, he seeks help from God (who has been watching over him), and the two nemeses face off for God's list of protected souls.

Several attempts to remake the movie have ended up in Development Hellnote No pun intended, most recently with Ellen DeGeneres or Betty White in the lead role.