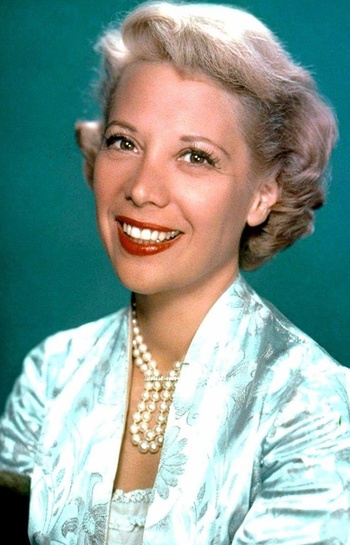 "I never wanted to set the world on fire, so I never had to burn any bridges behind me."
Advertisement:

A native Tennesseean, she first rose to prominence as a recording artist during the Big Band era, becoming the nationwide top-charting female vocalist of the 1940s. While Shore's singing career waned with the rise of rock and roll, she achieved further success in television as the hostess of variety shows, such as The Dinah Shore Chevy Show (renamed The Dinah Shore Show when Chevrolet stopped sponsoring it) in the '50s and '60s and Dinah's Place (followed by Dinah!) in the '70s.

Shore also left a mark in the world of professional women's golf. After starting in the sport at the age of 52, she co-founded the Colgate Dinah Shore Golf Tournament, most recently renamed the Chevron Championship, one of the five major American golf championships for women. She was inducted into the World Golf Hall of Fame shortly after her death in 1994 for her role in promoting the women's game.

She was married to actor George Montgomery for 20 years until their divorce in 1963, and had a high-profile relationship with Burt Reynolds in the '70s.

Tropes applying to her works and career: