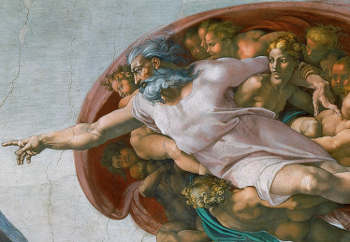 Pull My finger.
"People often make God to be their father, and He ends up as a Big Beard In The Sky — because that's what your father is when you're five years old."
—Om, Small Gods
Advertisement:

God, when given a visual appearance in media, usually appears as an old, bearded man with white hair and robes. He also has an undeniable air of wise authority, possibly glows or has a Holy Backlight, and has a booming, authoritarian, yet somehow understanding voice.

Grandpa God is a manifestation of how many people, at least in the West, like to view their Almighty Deity — pretty much as being the personification of their grandfather. Because let's face it — like it or not, when most people think of religion, particularly Christianity, they end up thinking of something old — as in, several thousand/billion years old. If God's been around telling us to do stuff this whole time, He simply has to look like an old family authority figure, or else how would we know well enough to respect Him?

There's also the fact that, well, God has to be visually depicted in some manner, and while something like a featureless glowing light or evershifting fractal are more accurate in that they convey sexlessness and the absence of an actual physical body, they are hard for viewers to get an emotional read on due to the lack of a face.

Of course, in order to keep from mistaking Him one of those old people we like to make fun of, He needs all that other fantastic aura stuff, so even if He's old, He can still scare the bejeezies out of us if He feels like it.

This character is particularly popular in Art and Western Animation, or pretty much anything that's drawn instead of any work with actors. This live-action absence of Grandpa Gods is largely because finding a person in Real Life who looks like they could be God and can act like Him is incredibly difficult.

Some believe that this portrayal of the Christian God is taken from the Greeks' image of Zeus. Of course, it could also be that Zeus's portrayal came about from the same association of divinity with wisdom and age that motivated Christians to portray God as elderly. After all, this same association motivates artists to create mystical old men like Santa Claus and Wizard Classic characters like Gandalf and Dumbledore.

These days, odds are even that God will either be this or Divine Race Lift (if not both). Interestingly, Grandpa God seems to be treated with equal respect (by other characters) regardless of whether He is being used in a comedic or dramatic way. This is a character type that exists mainly because everyone can recognize who it is almost immediately.

This character usually, but not always, lives in Fluffy Cloud Heaven.

A Sub-Trope of God and often a way to show God Is Good by emphasizing wisdom and love. Contrast with You Cannot Grasp the True Form, a common way of depicting God in a non-physical way. Compare and contrast the King of All Cosmos. Compare Big Red Devil, a popular image of the Devil often used in works with a Grandpa God. Little Miss Almighty is an inversion of sorts. Contrast Hot God, for religions that like their deities a bit more on the sexy side.

As if being an Omniscient immortal wasn't enough, this ancient, wrinkled grandfather can transform into a dragon-like demon.

As if being an Omniscient immortal wasn't enough, this ancient, wrinkled grandfather can transform into a dragon-like demon.