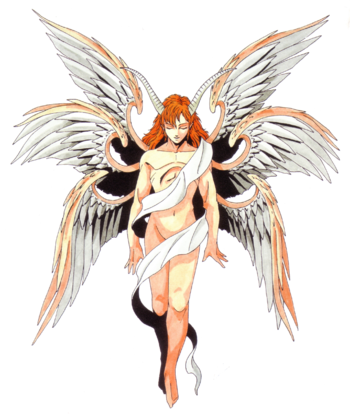 Pictured: Lucifer, the Demon Lord. Ruthless, manipulative, rebellious, and bishie as hell.
"Even Satan masquerades as an angel of light."
— 2 Corinthians 11:14, The Bible
Advertisement:

In many works of fiction, angels and demons are depicted with obvious markers. Like the two are distinct "races", and often polar opposites. Divine creatures (including good gods) are often Winged Humanoids that glow with Angelic Beauty, while Infernal creatures (and evil gods) are Big Red Devils with horns, cloven feet, and nasty big pointy teeth. You'd never mistake one for the other, or even think they have much in common. But this trope is for when you can confuse them. When the two are very similar, and easily mistaken for each other.

If there are any distinctions in appearance at all, they are likely to be subtle. Perhaps Good Wings, Evil Wings are involved, with the two groups looking otherwise identical. Or differences in costume while Acting for Two, where the same actor is used to portray both a Christian God/angel and Satan/demon. That specific technique is most likely codified by George Burns in Oh, God! You Devil. The similarity of appearance is Older Than Feudalism: The story (or, more precisely, relatively late interpretation) of the Old Testament is that Lucifer (Satan) himself was the most powerful of the Heavenly Host, before deciding to turn away from his God. He can still appear as an angel of light because he is one, not because he's disguised. In other words, the difference between angels and demons is the same as between a good human and an evil one.

This trope can be used to complement other similarities. The creator may be trying to show the two groups are similar or God Is Evil. It can also be used to explain why a normally good person is willing to make a Deal with the Devil, instead of turning it down out of principle.

Beware Beauty Equals Goodness: just because an infernal creature can choose to have Angelic Beauty doesn't mean they are angelic. Compare Light Is Not Good, just because a character looks good, doesn't mean they actually are. Compare Face of an Angel, Mind of a Demon, where a person with an evil mind has a beautiful and innocent face. Compare Fallen Angel, where an angel becomes an advocate of evil, and Ascended Demon, where a demon becomes an advocate of good. See also Our Demons Are Different and Our Angels Are Different.

After Garcia defeats Flemming, Paula - who through the whole game has been tortured by Flemming - is driven to kill Garcia as an angelic-demon.

After Garcia defeats Flemming, Paula - who through the whole game has been tortured by Flemming - is driven to kill Garcia as an angelic-demon.