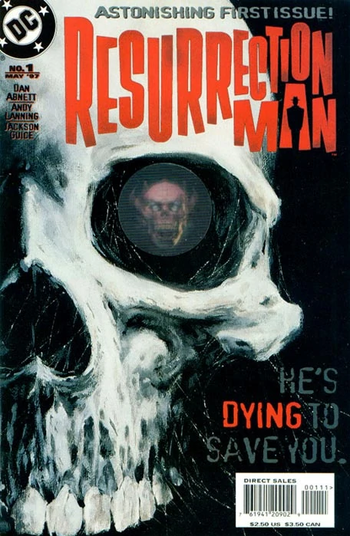 Urban legend tells of a drifter wandering the side roads and back streets of the USA, a man who can't stay dead. A Resurrection Man.
Advertisement:

The legend is true. His name is Mitchell Shelley, and he's wandering the Earth, trying to do good by others where he can. Every time he dies, he comes back with a new superpower.

Mitch was originally the star of his own DC Comics ongoing back in the 1990s, created and written by Dan Abnett and Andy Lanning (later known for Annihilation, Nova and Guardians of the Galaxy). His first appearance was actually Resurrection Man vol. 1 #1 (May, 1997). The series lasted for 27 issues, from May 1997 to August 1999. Focusing on his search to discover the truth about himself and his powers. Since the end of his original series, Mitchell has had guest appearances in various titles. He returned to the spotlight in a new Abnett/Lanning series as part of DC's New 52 relaunch in September 2011. This series only lasted for 13 issues, ending with a Zero Issue where Mitch learned his origin.