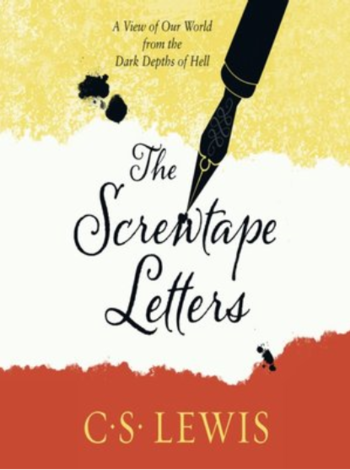 From One Devil To Another
These creatures are always accusing one another of wanting "to eat the cake and have it"; but thanks to our labours they are more often in the predicament of paying for the cake and not eating it.
— Screwtape
Advertisement:

An Epistolary Novel by C. S. Lewis in which a more experienced devil named Screwtape writes a series of letters to a younger devil named Wormwood on how to successfully tempt a man, referred to only as "The Patient". Intending the book as a fairly humorous work, Lewis's goals included both reflections on the nature of evil and an effort to create a different portrayal of the Devil than the sort normally seen in pop culture. Screwtape has practically No Sense of Humor himself, and comes across as a sort of cranky cosmic killjoy. At one point, this devil even goes so far as to complain that the music in Heaven is getting on his nerves — even though he can't hear it, the very thought that they're making music at all hours bothers him (he'd prefer some nice ugly noise instead). Heaven is a nonstop hootenanny "where all that is not silence is music". Screwy's not the sort of devil who would be very much fun at a party, which is pretty much the point of the book.

In the introduction, Professor Lewis comments that while looking through the modern world to find an appropriate symbol of evil, he felt that Hell should have a bureaucracy, one combining the worst elements of a police state and a crooked, greedy, money-hemorrhaging business, to make it better resemble some of the most damaging institutions of his time. Screwtape is a member of Hell's vast middle management, at one time listing a long, pretentious title at the end of one of his letters.

C.S. Lewis also wrote a sequel short story, "Screwtape Proposes a Toast" (which is included in many reprints of The Screwtape Letters), presented as a post-banquet speech Screwtape offers to a graduating class of the Tempter's College.

Adaptations of the work include a 2009 audio drama on Family Radio Theatre starring Andy Serkis (Gollum in The Lord of the Rings trilogy) as the voice for Screwtape, a comic book adaptation by Marvel Comics in 1994, and a stage adaptation by Max Mclean. 20th Century Fox has held the film rights to the novel since 1950, but despite previous plans to partner with Walden Media to make a live action film adaptation with a 2008 release date, the project is currently in Development Hell. (It's perhaps worth noting that Lewis himself considered the book inherently unstageable and unfilmable, and once advised a playwright who wanted to adapt the book with a framing device to go ahead and make the framing device into its own play, leaving Screwtape out of it!)

Adaptations of this book provide examples of: