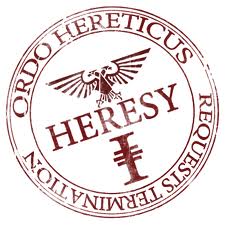 The Inquisition warns you. Plots are made to be enjoyed. Do not analyze. Do not criticize. Eat your Filler and read your mantras daily.
"With regard to heretics two points must be observed: one, on their own side; the other, on the side of the Church. On their own side there is the sin, whereby they deserve not only to be separated from the Church by excommunication, but also to be severed from the world by death. For it is a much graver matter to corrupt the faith which quickens the soul, than to forge money, which supports temporal life. Wherefore if forgers of money and other evil-doers are forthwith condemned to death by the secular authority, much more reason is there for heretics, as soon as they are convicted of heresy, to be not only excommunicated but even put to death."
— Thomas Aquinas, Summa Theologiae
Advertisement:

The word "heresy" is derived from the Greek word haeresis, meaning "party" or "sect" (as in heterodox splinter group, an organized minority who go against canon). It is ultimately derived from the verb haireo, meaning (among other things) "to choose," "to prefer," so etymologically, a heretic can be thought of as a person who chooses his own path. This need not be true in practice, of course, as the heretic may adhere to his own set of beliefs just as unreflectively as any mainstream believer. However, under systems which promote rigidly dogmatic ideologies, free-spirited persons who oppose them will almost by default be labeled heretics by the authorities.

The Heretic is someone who has committed Thought Crime or outright Treason against The Church; a person who has corrupted, perverted and manipulated its philosophy and ideology. Most commonly, he was once a member of its congregation or even its clergy but got officially excommunicated for propagating beliefs that go against The Church's official dogma. Often, the Church sends out Knights Templar to Kill Them With Fire along with witches. Just being a heretic doesn't mark you evil by default: A heretic to a Saintly Church is often Chaotic Evil, but a heretic to a Corrupt Church or a Path of Inspiration may well be a Defector from Decadence. Or just as bad as them.

To qualify as a heresy worthy of condemnation, the "heresy" should have an intrinsic connection to doctrines of the church in question. Someone who merely disagrees with the Church as an outsider is not a heretic - non-followers are more properly called "nonbelievers" (or "infidels", less politely). Heresy was distinguished from heathenism in that a heathen blasphemed simply because he or she was ignorant of God's light, whereas a heretic knowingly contradicted the teachings of God and the Church. As long as heathens did not endanger the Christian faith then it's ok to do trade with them; but a Heretic who modified the doctrines of Christianity while still claiming to be Christian was dangerous to the unity of the Faith. For instance, Hypatia of Alexandria, Wiccans and Buddhists are not considered "heretics" to the Catholic religion, but Padre Ned Reidy was put on trial for heresy.

Much like Your Terrorists Are Our Freedom Fighters in the political realm, those whom the Church labels "heretics" often claim that they're actually "reformers" or "purifiers". Christian theologian Irenaeus popularized the word heresy in the Christian world in his anti-Gnostic tracts. Multiple heretics often form a Cult. Heresies are often named for their leader, e.g. Arianism, propagated by Arius. If these groups persist and grow, they can become "denominations" of a religion, e.g. Lutheranism, founded by Martin Luther. Even Islam was typically considered a heresy by the medieval church, whereas nowadays most people would say it is a separate religion.

Compare Thought Crime and Illegal Religion. For deviations or treason against the Canon of Fictional Media and/or their Fandoms, see Fandom Heresy.