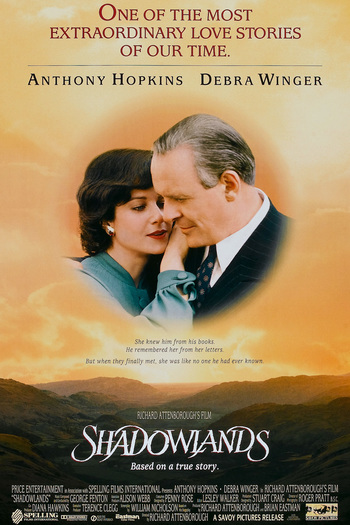 "Why love, if losing hurts so much? I have no answers anymore: only the life I have lived. Twice in that life I've been given the choice: as a boy and as a man. The boy chose safety, the man chooses suffering. The pain now is part of the happiness then. That's the deal."
Advertisement:

Shadowlands is a 1993 drama film directed by Richard Attenborough, starring Anthony Hopkins and Debra Winger. It was adapted from the 1985 teleplay starring Joss Ackland and subsequent stage play of the same name starring Nigel Hawthorne by William Nicholson.

The story is based on the real-life relationship between the English writer and professor C. S. Lewis (Jack, as he is known to his friends) and the American poet Joy Gresham (née Davidman).

Not to be confused with a film of the same name (that covered Lewis' relationship with his wife) from 1985 or the 2020 World of Warcraft expansion.