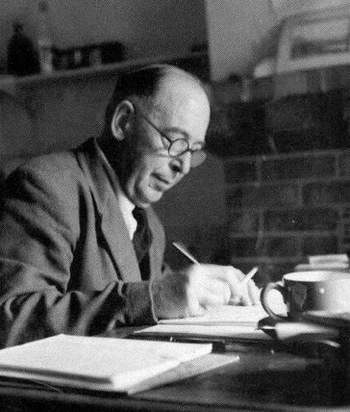 "...I often find myself living at such cross-purposes with the modern world: I have been a converted Pagan living among apostate Puritans."
— Surprised by Joy
Advertisement:

Clive Staples Lewisnote "Jack" to his friends and family (29 November 1898 – 22 November 1963) was a British author of many sorts of books in the mid-20th-century: scholarship regarding medieval literature, lay Christian theology, Science Fiction, and Fantasy.

Lewis was born and raised in Ulster. His mother died when he was young. He was educated in a series of English Boarding Schools, the first of which was run by a Sadist Teacher. He fought in the Great War. He was a member of The Inklings and a friend of Charles Williams and J. R. R. Tolkien, whose influence partially led him to rediscover Christianity (though Lewis being an Anglican and Tolkien a Roman Catholic led to some friction). He published an autobiography of his early life and conversion titled Surprised by Joy, which was edited by his friend, the American writer Joy Davidman Gresham. After he married her so she could remain in the UK, they fell desperately in love and had an Anglican ceremony after Joy was diagnosed with terminal bone cancer. She died four years later, leaving Lewis so heartbroken that he ended up writing A Grief Observed to work through his struggle with his faith. Lewis himself died on the same day as Aldous Huxley and John F. Kennedy; this led to his passing being almost unpublicized.

Lewis and Gresham's romance was dramatized in the teleplay and its subsequent stage and film adaptations Shadowlands, with Joss Ackland, Nigel Hawthorne and Anthony Hopkins taking the role of Lewis in the television, stage, and film versions respectively. Also, a biopic called Tolkien & Lewis portraying the two authors' friendship is reportedly in development.

Trope Namer for The Four Loves (from the book The Four Loves), Narnia Time (from the way time works between worlds in The Chronicles of Narnia), and Bulverism (from an essay about a boy named Ezekiel Bulver who decides to go through life committing the fallacy that now bears his name).

For a complete list of Lewis' writings, non-fiction and fiction, see the other wiki