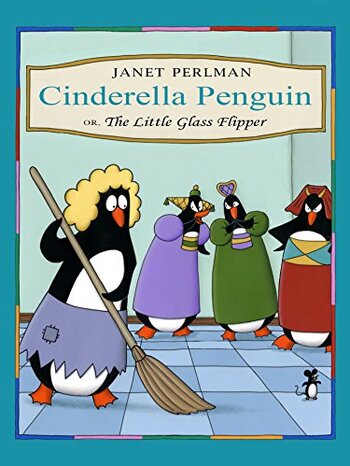 At least she won't need a dress, since she's already in a tux.
"I had to write something and couldn't think of a plot, so I decided to write a Cinderella story because it already had a plot!"
—- Gail Carson Levine, speaking about Ella Enchanted.
Advertisement:

Cinderella is perhaps one of the most famous fairy-tales there is, and it's a fairy-tale that has been around since 1st century Greece and the story of Rhodopis. Over the years, it has seen its fair share of versions and adaptations, one of the most popular being the one by Charles Perrault and later adapted by Disney in their version. As a result, it's a story that has proven to be easy to tell and adapt, to the point where the basic plot has become something of a stock plot.

Here's the basic run-down: Cinderella is a girl with a Wicked Stepmother and two spoiled stepsisters. She's forced to be a slave to her stepfamily, and has no real means of escaping this life. When there's news that the kingdom's prince is throwing a ball, her stepmother forces her to stay home from it, but either through the use of magic or ingenuity, she disguises herself (sometimes getting The Makeover) and attends. The prince dances with her and falls for her, but to get home on time, she's forced to run away from him before he can learn who she is. In her haste, she leaves behind something, often a Glass Slipper, which the prince finds. Searching the kingdom, he uses the slipper to discover which girl he danced with. Cinderella is found by the prince, and they get married. Variations on the story exist; sometimes she has a father, sometimes she has a Fairy Godmother, and sometimes she has animal friends. Sometimes the story is told in a modern setting rather than a fantasy one, and sometimes there's other characters beyond the core cast. Regardless, this basic plot usually remains the same, and is a broad enough template to work in a variety of situations.

The recognizability of these stories means that even if the plot is varied or twisted, however, the audience will still catch onto the reference being made. As long as enough of the beats are kept, then the rest of it can be entirely unique without sacrificing the basics of the plot. Thus, these stories are ones that thrive on being altered and re-told in different styles; rather than continue to tell the same story, they stick to the basic idea while adding their own flavor. An example doesn't need to rehash the entire story in order to count. If Cinderella only has one stepsister and the story ends on a Be Yourself aesop, it's just as much a Cinderella story as the one where the stepfamily plot is skipped entirely in favor of a story about a girl going to a dance and running away, or the one where Cinderella never gets to go to the ball and the story ends in tragedy. And don't forget about all the parodies!

With that said, these stories still need to be, well, stories, whether stand-alone or as part of a larger whole (often as part of a Fairy Tale Episode). Minor references to Cinderella would go here instead. Also note that while this trope can allow for full adaptations, there still needs to be enough of a spin for it to be a distinct story; works that are just adaptations with nothing added or altered wouldn't count, since at that point it's not a reference or template, but a completely straight re-telling of the story, and thus not this trope.

If the character's name also follows the template, this may overlap with Ladyella.