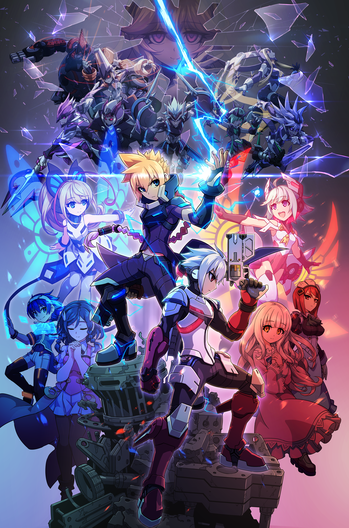 Azure Striker Gunvolt 2 is the second game in the Azure Striker Gunvolt Series created by Inti Creates. Gunvolt 2 was released for the Nintendo 3DS in August 2016 in Japan, with a worldwide release coming a month later in September 2016. It was also bundled together with the first game in the Striker Pack, released for the 3DS in 2016, the Nintendo Switch in 2017, PlayStation 4 and PC via Steam in 2020.

A few months after the end of Gunvolt, Gunvolt and his rival Copen intercept a Sumeragi airship hijacked by Adepts. While Gunvolt manages to stop the airship from crashing, it is revealed that the entire scenario was a ploy to draw Gunvolt into the clutches of Eden, a pro-Adept group hellbent on wiping the human race off the face of the Earth to create a paradise where Adepts can thrive. Joule is captured by Eden's forces and split into nine Shards, each containing a fragment of her Septima, The Muse, and the Shards are distributed among Eden's Seven, a band of particularly powerful Adepts who headline Eden's strongest. While Gunvolt seeks to reclaim the Shards to save Joule, Copen discovers that the Shards' power has the ability to heal his ill sister, Mytyl; to this end, Copen sets out to claim the Shards for himself to save his sister.

While Gunvolt himself will feel familiar to veterans from the first game, his kit is further enhanced by the introduction of the Clip category of equipment, which determines how many Tags you can accumulate at once. New to Gunvolt are "Azure Spirits", which can be found in two stages and bestow unique Skills otherwise unobtainable via leveling up. The most radical change to 2 is the introduction of a whole new playable character: Copen, who originally appeared as a recurring minor boss in the original game. Armed with a suit that enables flight and a gun that can fire homing lasers when locked on, Copen offers a faster, more fluid, and more dynamic style of play focused on aerial combat that rewards both style and substance.

Gunvolt 2 was followed-up by Luminous Avenger iX, a Gaiden Game that puts Copen in the spotlight and builds upon the gameplay introduced in this game. A direct sequel, Azure Striker Gunvolt 3, was announced at BitSummit Gaiden 2020; you can watch the "first look" trailer here