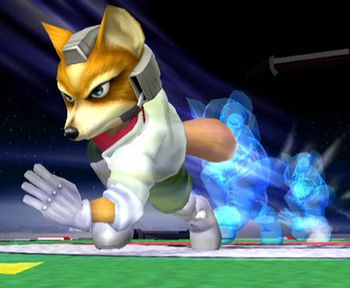 One common way of portraying a character as moving very, very quickly in fiction is to make multiple images (technically speaking, afterimages) of them viewable at once. They appear to be moving so fast that they're in several places at once. For the sake of preventing confusion, usually the "non-static" parts are shaded with less color, so we're sure that a character is moving really fast as opposed to being a monster with eight arms. Indeed, this trope is much easier to show than it is to describe — it's one of those effects that usually has to be pointed out to a casual viewer for them to even realize it's there.

In some fiction, the echoes are more than just a special effect — they're literal. Other characters can see them and be confused by them, making them effective covers for highly elaborate martial arts attacks. In video games, they can be used as an excuse to force the player to use timing to hit the "real" image. For various reasons, using speed echoes for the Doppelgänger Spin doesn't really make a whole heck of a lot of sense, but eh, roll with it.

Note that sometimes this trope can be used somewhat lazily: a character will have speed echoes but aren't really moving all that fast. The echoes are just to make us think they're moving fast.

This is somewhat distinct from Doppelgänger Attack, although technically a work can employ both at once. Related to Speed Stripes and Flash Step, both of which often employ this trope in their basic function. Indeed, you can see examples of speed echoes in action in both of those pages' images. Can also overlap with Colorful Contrails.

Sayaka is too fast for her opponent.

Sayaka is too fast for her opponent.