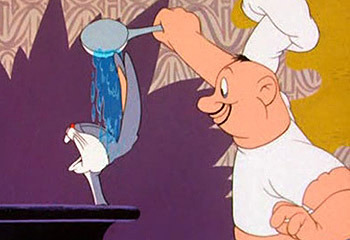 "The back, please; the back."
Neelix: And the next thing I knew I was being boiled alive in a pot of my own leola root stew.
Torres: Talk about a nightmare!
Neelix: It was perfectly seasoned.
— Star Trek: Voyager, "Waking Moments"
Advertisement:

Bob and Alice are lost in the woods, when suddenly, a wolf that talks and walks on two legs invites them to his cave for dinner. Bob and Alice accept the invitation, only to wind up in a big black stewpot while the wolf chops carrots and other ingredients into the broth.

Other likely culprits are a Cannibal Tribe preparing a cannibal stew (despite not actually having the technology to make a metal cauldron), a Big Red Devil boiling sinners in Hell while prodding them with a pitchfork, or a Wicked Witch looking to use up those leftover German kids she has lying around.

Was very common in The Golden Age of Animation as well as comic strips from the first half of the 20th century, usually along with a gag about the person being stewed wanting to know what smells so good, or why his "bath" water seems like it's getting hotter and hotter.

Like Meat-O-Vision, this trope is often Played for Laughs as a form of Black Comedy Cannibalism, though getting boiled alive for real ranks as one of the less pleasant ways to die. On the other hand, Eaten Alive is more likely to be played for horror.

This can be a death trope. Watch out for unmarked spoilers!