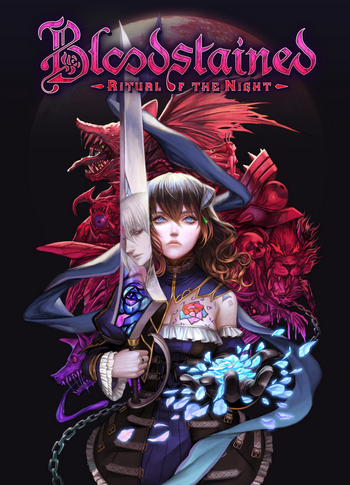 What do you do when you find yourself without a castle? You build another.
"A new, vital heart, pulsing with the old blood."
—Pixel IGA
Advertisement:

Bloodstained: Ritual of the Night is a 2D Metroidvania (or as the Kickstarter calls it, an "IGAvania") game for the PS4, Xbox One, Windows, Nintendo Switch, iOS, and Android. It is directed by Koji "IGA" Igarashi, acclaimed producer of Castlevania titles from Symphony of the Night to Harmony of Despair and progenitor of the Metroidvania subgenre, and developed by ArtPlay, DICO, and WayForward. Inti Creates (developers of Mega Man Zero and Azure Striker Gunvolt) also originally assisted with development until they parted ways and were subsequently replaced by DICO.

In times long past, there existed the Alchemist's Guild, masters of the arcane with great influence and power. When changing times threatened their reign, they created Shardbinders, youths infused with demonic strength, and through ritual sacrifice opened the gates of Hell. Demons were unleashed unto the world, and although the invasion was ultimately quelled, many lives were lost and the Alchemist's Guild was brought to ruin.

Surviving the apocalypse were two young Shardbinders: Miriam, who fell comatose before she could be sacrificed, and her childhood friend Gebel. Ten years after the demonic invasion, Miriam awakens from her slumber just as a mysterious castle from Hell emerges. When Miriam discovers that the lord of the castle is none other than Gebel himself, Miriam, with the help of former Alchemist and longtime friend Johannes, heads for the castle to seek answers about her friend's betrayal and put a stop to the demons once and for all.

was launched on May 11, 2015. The first wave stretch goals were reached within hours of the campaign's launch, and since then stretch goal after stretch goal was revealed and subsequently crushed. By the end of its campaign on June 12th, it had raised a whopping $5,545,991note Not counting the additional $200,000+ from PayPal backers, becoming the most funded video game on Kickstarter, after Torment: Tides of Numenera held that record for over two years, and remained so for about a month before Shenmue III surpassed it. It is also the ninth most funded Kickstarter campaign overall.

The PlayStation 4, Xbox One, and PC versions were released on June 18, 2019, with the Switch version released on the 25th. A port for mobile devices was released on December 4th, 2020; this version features reduced graphics and an optimized mobile control scheme to better run on phones and tablets, with all existing and future post-release content bundled for free with the base $9.99 purchase.

Due to the absolutely massive amount of promised content, features are gradually added on to the game since its release through a regular update cycle. The game received its first major update on May 7th, 2020, adding Zangetsu as a playable character and a Randomizer Mode. Additional content added through updates includes Boss Revenge (where you fight Miriam as playable bosses), a surprise playable character for the main game in Bloodless, and Classic Mode, a sub-game where you play through a reformulated version of the game in the style of Castlevania.

Inti Creates, despite leaving development, stuck around to fulfill a particular stretch goal to create a retraux spin-off title to the main game, which became the Bloodstained: Curse of the Moon series.

In 2020, Bloodstained: Ritual of the Night and Kingdom: Two Crowns have joined forces. The Deadlands update for Kingdom has Miriam, Zangetsu, Gebel and Alfred as playable rulers. Meanwhile Bloodstained has a Kingdom DLC where Miriam goes to a short area from the Kingdom world.

Miriam's crossover adventures don't end there. In February 2021, she wound up in the land of Cvstodia as part of Blasphemous's second DLC, Strife and Ruin, enlisting the Penitent One's help in sending her back to her own world.

In 2022, the third planned playable character, Aurora from Child of Light was released, with mechanics derived from her own game.

A sequel has been confirmed to be in development.

Bloodstained: Ritual of the Night contains examples of:

Bloodstained: Ritual of the Ni

Bloodstained: Ritual of the Night, a Spiritual Successor to Castlevania, inherits most of its Gothic trappings, but is rooted in medieval demonology instead of vampire lore.

Bloodstained: Ritual of the Ni

Bloodstained: Ritual of the Night, a Spiritual Successor to Castlevania, inherits most of its Gothic trappings, but is rooted in medieval demonology instead of vampire lore.