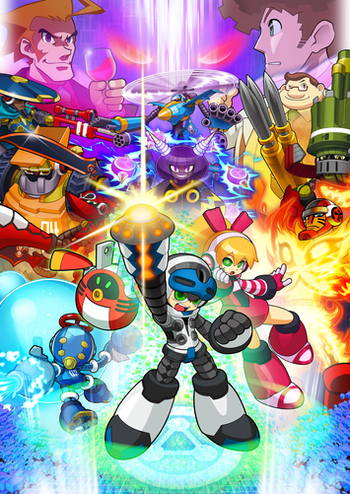 Here for you, at your Beck and Call.
"'Mighty' is defined as possessing great and impressive power or strength, especially on account of size. The mighty nature inside a tiny man can make the hardest task routine. And the smallest spark in a mighty man can power the impossible dream."
—The staff roll theme "Mighty", by Mega Ran
Advertisement:

A spiritual successor to the classic Mega Man series, created by its famed director Keiji Inafune. Like its predecessor, it is a platform game of the action and Run-and-Gun variety, along with the predecessor's system of growth and progress via Power Copying. The plot involves the titular "Mighty Number" robots, originally peace-keeping combat androids, who go rogue after an unknown computer virus turns them against mankind. Now it's up to Beck, the ninth and final of the Mighty Numbers, to defeat his older siblings, aided by his partner Call and his creator, Dr. White.

The production was staffed by many former Mega Man developers, and Mega Man Zero developers Inti Creates. The project was successfully funded

through Kickstarter, becoming the site's third highest funded console game project in the process. Not only did the project reach its funding goal on September 2, 2013, 29 days before the due date, but after reaching its $3.5 million stretch goal, the game was promised to be released on Windows PC, Mac, and Linux operating systems, PlayStation 3 and Xbox 360, all three platforms of the eighth generation, and Nintendo 3DS and PlayStation Vita handhelds. Thanks to their partnership with Deep Silver, an extra DLC stage centering around a mysterious robot named "RAY," who possesses similar Xel manipulating abilities to Beck but her body is constantly deteriorating, was not only funded, but also made RAY a fully playable character in a separate story campaign once unlocked.

Originally scheduled for an April 2015 release, it was delayed until September 2015. Then it was announced

in the backers-only private forums, and later at Gamescom 2015, that the game was delayed again and aimed for a February 9th, 2016 release on consoles, with the handheld versions releasing later on (the handheld versions ended up never coming out). The game was delayed at least one more time during development, before it was finally released on June 21, 2016 for North America and Asia, and worldwide on June 24 of the same year. It turned out to be Comcept's swan song; the game's poor reception and ultimate failure resulted in the company's downfall, and in 2017 they were bought out by Level-5.

In addition to his own game, Beck also co-stars in Mighty Gunvolt, a spin-off of Inti Creates' own Azure Striker Gunvolt series of 2D action-platformers that involves the titular Gunvolt, Beck, and Gal*Gun Double Peace heroine Ekoro coming together for a Retraux Mega Man-style adventure that borrows levels and enemies from all three games. Beck, followed by Call and RAY as DLC, would also go on to co-star in the game's sequel, Mighty Gunvolt Burst, which effectively takes Mighty No. 9 and adds both Gunvolt and elements of the Gunvolt series into a proper crossover game.

. An animated series of the game was being produced, but the game's disastrous launch caused it to be cancelled. You can still see the trailer here

A pseudo-sequel and spiritual successor to Mega Man Legends, Red Ash was announced on Kickstarter in July 2015, with different versions of Beck and Call living in a post-apocalyptic sci-fi world. Unlike Mighty No. 9's runaway success, Red Ash was met with backlash and its future is uncertain. While it was picked up by a publisher when it seemed the Kickstarter would ultimately fail, nothing has been heard of it since. A single episode of an anime series aired briefly, but was quickly pulled and is now near impossible to find.

Mighty No. 9 harnesses the power of these tropes:

This infamous line in the Mighty No.9 Trailer.

This infamous line in the Mighty No.9 Trailer.