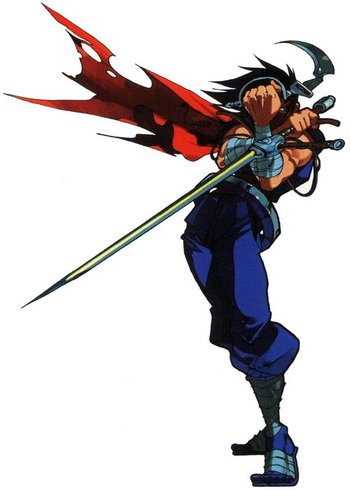 Special A Rank Assassin.
"He slashes, springs, slides and climbs! Every single action he takes is superhuman! Here comes the super-A ranked strider called 'Hiryu'!!"
— Game description from the X68000 version of the Arcade Game.
Advertisement:

Strider is a stylish 1989 action / platforming game by Capcom about a Ninja with an incredibly badass sword. The game features our hero Hiryu as he takes on the Grandmaster, an entity from another galaxy that has decided to conquer the Earth. The arcade game was ported to many systems, including the Sega Genesis, where it was one of the system's first Killer Apps, and the first game to be released on an 8-megabit cartridge.

The arcade version of Strider was actually the product of a three-way collaboration between Capcom and manga studio Motomiya Kikaku, which also resulted in a separate NES game and a single-volume manga version. The manga and NES version follows Hiryu, as he is forced out of retirement to track down and eliminate Kain, a fellow Strider and friend who has been compromised by his capture. Hiryu must travel around the world, from enemy bases to a moving train and from New York to China. During his mission, he uncovers a conspiracy that involves the Strider organization. The NES version understandably has a much deeper story than the more-famous arcade version, but suffered from many programming and control errors. Notably, the NES version was never released for the Family Computer in Japan, in a bizarre reversal of No Export for You.

The game naturally inspired a number of imitators and similar games, such as Run Saber and Shadow of the Ninja. Two of these, Osman and Moon Diver, were created by the same designer of the original and are considered its Spiritual Successors. In 1990, the British company U.S. Gold produced an officially-licensed sequel titled Strider II, which was originally released for various home computer platforms in Europe (specifically the Amiga, Atari ST, Commodore 64, Amstrad CPC and ZX Spectrum). The game was remade in 1992 for the Mega Drive with redesigned stages and play mechanics much closer to the original arcade game. This was that version that was released in North America under the title of Strider Returns: Journey From Darkness. An 8-bit Sega Master System version of Strider II was also released, with a corresponding American release for the Game Gear under the Strider Returns title.

The series remained silent until 1998, where Hiryu was included as a playable character in Marvel vs. Capcom and its sequel Marvel vs. Capcom 2: New Age of Heroes. Hiryu's speed, easily-chained combos, zone control, and full-screen Limit Break made him a favorite of Scrubs and "Stop Having Fun" Guys alike. Thanks to this newfound popularity Capcom partied with Strider 2, released first in arcades in 1999 and later ported to the PlayStation a year later, where Hiryu once again faces the Grandmaster as well as a new foe, the renegade Strider Hien. Since then, Hiryu and his enemies have appeared in Namco × Capcom; notably, the Grandmaster gets the honor of being the last Big Bad to be confronted before the biggest bad herself. While not present in Marvel vs. Capcom 3 due to copyright issues, Hiryu did join the line-up of its Updated Re-release, Ultimate Marvel vs. Capcom 3.

The series received a new sequel in the form of a open-world Metroidvania-style game in 2014 by Double Helix Games, overseen by the original developers at Capcom's Osaka Studio. Following the 2014 revival, Hiryu and some of his enemies would then go on to appear in the crossovers Project X Zone 2: Brave New World and Marvel vs. Capcom: Infinite, and his uniform was included as DLC in Monster Hunter Generations and its Updated Re-release Generations Ultimate.

In 2017, Street Fighter V reintroduced Zeku (Guy's master from Street Fighter Alpha 2) as the last Season 2 character, and he returned not only with a design and moveset that leans heavily on Hiryu's, but his backstory strongly implies he's got a hand in the creation of the Striders organization, establishing Strider as being part of Street Fighter's ever-growing Shared Universe.

Not to be confused with the Beverly Cleary book with the same name, the alias of Aragorn from The Lord of the Rings, or Dave.

Media in the Franchise: