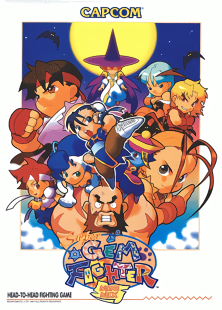 You must be cuter than Sheng Long to stand a chance!
Advertisement:

Super Gem Fighter: Mini Mix (known as Pocket Fighter in Japan) is a Mascot Fighter of sorts by Capcom. It was released in 1997. It uses the same Super-Deformed character sprites last seen in Super Puzzle Fighter II Turbo note well, after a fashion; Ryu and Ken are modeled after their Street Fighter II incarnations rather than the Street Fighter Alpha ones, for example as well as many of the same characters, with some replacements here and there.

While there's no overarching plot to the game, each character has his or her own story consisting of an introduction cutscene and their own ending as well. They're all of the comical variety, given the game's tone.

It plays like a typical Capcom fighter... with only 3 main buttons: Punch, Kick and Special. The game also features a dial-a-combo system (known as Flash Combos in-game) which lets you perform combos via set button inputs. During these combos, or certain other attacks, fighters will rapidly change costumes, from comical outfits (like Sakura's Bunny Girl attire or Akuma in a speedo) to Capcom character cosplays (like Felicia as Mega Man or Chun-Li as Jill Valentine).

And of course, there's the titular Gems, which serve to level up your character's special moves (which all start at Level 1 and can go up to Level 3) when you collect them, making your special moves more potent (such as Akuma's Level 3 Zanku Hadoken becoming Shin Akuma-style double Zanku Hadokens). You collect gems—which come in one of three colors (red, blue, and yellow) to correspond to one of your characters' three special moves—by pummelling your opponent or obtain them either from treasure chests that appear randomly mid-battle or flying characters from SonSon that fly across the screen from time to time, with tiny gems providing a little boost and huge ones giving you a whole level. Said SonSon characters may also drop special orbs that can be thrown as weapons or even food items to restore health.

There's also the Mega Crash, which lets you escape combos or repel your opponent with a burst of energy, but you lose all your gems, too.

The game's roster consists of 12 fighters (10 normal, 2 "hidden"), 8 of which are, of course, Street Fighter characters, joined by 3 from Darkstalkers and even one from Red Earth. Several of them retain their sprites from Super Puzzle Fighter II Turbo, though Donovan Baine and Devilotte (who were in said game) didn't make the cut.

A free-to-play sequel to Super Puzzle Fighter II Turbo for iOS and Android titled Puzzle Fighter launched in November 2017, but ended its service in July 2018.