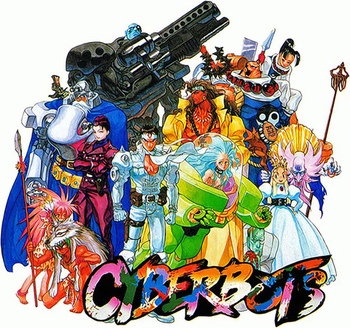 Also known as Cyberbots: Full Metal Madness, this is a Fighting Game made by Capcom in 1995 for arcade, Sega Saturn and PlayStation. The game is Capcom's attempt to create a Street Fighter clone using the Mini Mechas from Armored Warriors now turned into Humongous Mechas and using four buttons instead of the usual six. Officially, Cyberbots is a spin-off of Armored Warriors, bringing back and reusing mecha character designs from the previous game while introducing a new cast of pilot characters to control the mechas.

The story takes place in the end of the 21st century, where the Earth begins to become overpopulated, leading to many people living in space colonies. The primary army of Earth, "Earth Corps", has been conducting experiments; their work, along with the actions of the playable characters, will determine the future of Earth.

In the game, the player has to choose a pilot and one of the available mechas, called Variant Armors, and then duke it out against other pilots and mechas. The parts of these VAs can be Mix And Matched to affect the general playstyle through pre-set character variations in the character select screen. Each pre-set character variation has their own different parts and movesets that create their own unique playstyle. In fact, during the battle, the players can lose their parts, along with their special moves and attacks, but also pick them back up. The customization is based on the customizing concept seen in Armored Warriors, but different due to having pre-set variations of the characters available rather than freely picking up other parts like in the previous game.

Selectable in the console versions:

The series remained in obscurity until Devilotte was featured in Super Puzzle Fighter II Turbo in 1996. Jin also made the cut for Marvel vs. Capcom: Clash of Super Heroes and Tech Romancer in 1998, with Devilotte and her lackeys making the cut as a selectable Assist Character in the former, and Marvel vs. Capcom 2: New Age of Heroes. Finally, Blodia was featured in Namco × Capcom as a mecha for Sylphie, and Devilotte appears as a Solo Unit in Project X Zone, the game's Spiritual Successor. It's now available as a downloadable game in the PlayStation Network, under Japanese Imports. And the game makes its return as one of many available classic Capcom arcade games to play in the Capcom Arcade Stadium

bundle for the Nintendo Switch and it released on February 18, 2021, later available for PlayStation 4, Xbox One and Steam. It is also available as part of the Capcom Fighting Collection, released June 24, 2022 for all the same platforms as Arcade Stadium.