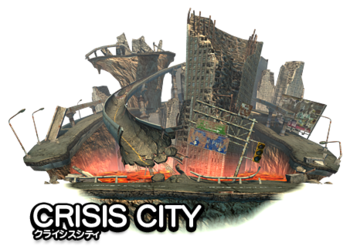 Cities are a great sign of city achievement. They're huge, filled with people, and hubs of business, which makes it narratively interesting to see them torn down. Fire raining from the sky, buildings collapsing on each other, monsters roaming the streets, and any kitchen sinks left intact being thrown in your face.

This trope evokes familiar elements from urban environments like the Big Applesauce with the worst elements of Mordor, often with a Real-Place Background. This trope is very often the result of a Monumental Battle, or any urban-centered Alien Invasion.

When Apocalypse Anarchy is involved, it may also double as Vice City. If there's a subway, expect a Sinister Subway. As is to be expected, this trope often overlaps with Ghost City, because most of the inhabitants have probably been killed by the environment. Can be a result of Trash the Set, if the city in question was a major setting. Ruins of the Modern Age is closely related, but the ruins don't necessarily have to be urban, and Urban Ruins don't have to exist after society collapsed.

A Sister Trope to Urban Hellscape (may not be in ruins, but law and order is long gone), and Industrial Ghetto (also not ruins, but feels like it).