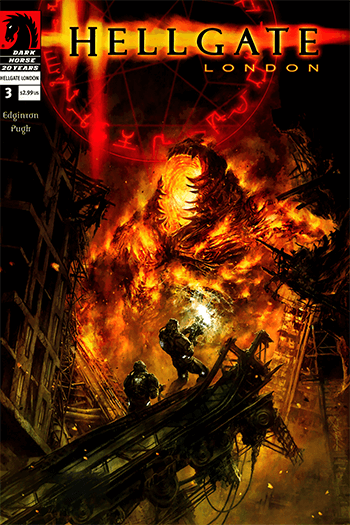 The great dragon was thrown down, that ancient serpent, who is called the Devil and Satan, the deceiver of the whole world — he was thrown down to the earth, and his angels were thrown down with him.
But woe to the earth and the sea, for the Devil has come down to you with great wrath, because he knows that his time is short!
— Revelation 12:9-12, New Revised Standard Version
Advertisement:

A subtrope of The End of the World as We Know It, Hell On Earth is what happens when The Legions of Hell decide to invade our world.

Maybe some ancient ritual went horribly wrong (or horribly right, or even Just as Planned) and opened a Hellgate, maybe the border between our world and Hell got torn asunder, or maybe our heroes unleashed it themselves by mistake. What the demons want mainly depends on the type of story and the type of demons involved. Whether they want to enslave us, annihilate us, eat us or worse, expect things to get a whole lot worse for anyone who isn't a demon.

As an End of the World scenario, most of the time when this shows up in media, it's an Evil Plan that has to be stopped lest all be lost, and usually does get stopped Just in Time. In that case it is a specific supernatural case of the villains having the Dystopia Justifies the Means as their motivation. But in some stories and series, the end has already happened, or happens in story, and now the heroes have to survive and hopefully find a way to either kill the demons or send them back where they came from and make sure that this doesn't happen again.

See Hell Invades Heaven for the one thing worse than this. Not to be confused with Mordor, which is usually just metaphorically Hell on Earth, or Physical Hell, where Hell is literally located on Earth.

For many of these examples, unmarked spoilers ahead.

The Zombie Apocalypse was kicked off when Swan blew a hole between the Living World and Rotten World.

The Zombie Apocalypse was kicked off when Swan blew a hole between the Living World and Rotten World.