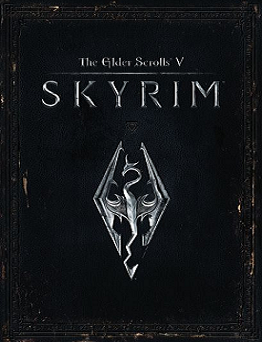 And the fiercest foes rout when they hear triumph's shout...
You should have acted. They're already here.
The Elder Scrolls told of their return.
Their defeat was merely a delay till the time after Oblivion opened, when the sons of Skyrim would spill their own blood.
But no one wanted to believe... Believe they even existed. And when the truth finally dawns... It dawns in fire!
But... there is one they fear. In their tongue, he is "Dovahkiin": Dragonborn!
— Esbern, Narration of the teaser trailer.

Skyrim is the fifth entry in Bethesda's The Elder Scrolls main series, released on November 11, 2011 note Or, as the advertising put it, 11.11.11 across multiple platforms.

It takes place 200 years after the events of the fourth game in the northernmost part of the continent, home to the Nords, as the province of Skyrim faces the return of Alduin the World Eater and his army of dragons. Alduin's return exacerbates the carnage of a bitter civil war between those who support the Empire of Tamriel, whose military presence in the snowbound province is overseen by General Tullius, and those who wish for independence, united under the leadership of Ulfric Stormcloak.

Into this enters what may be the last Dragonborn, a person born with the soul of a dragon, who has the ability to kill the dragons and absorb their souls. Under the guidance of Delphine and Esbern, two of the last Blades, and the monastic Greybeards of High Hrothgar, the Dragonborn must oppose Alduin and defeat him, lest he destroy the world.

The game runs on a heavily modified Gamebryo engine called the Creation engine, complete with all the Good Bad Bugs that Bethesda fans have come to know and love. The soundtrack is once again provided by Jeremy Soule. The PC version was also the debut title for the Steam Workshop, an integrated way to browse and upload mods, which are subscribed to and downloaded automatically via the Steam client. This had never been attempted on such a large scale before.

The first DLC for Skyrim, Dawnguard, was released in June 26, 2012 for Xbox 360, and then on the PC on August 3, 2012 after a slight delay (a deal meant that the DLC remained an exclusive for at least a month). PS3 users saw it released February 26, 2013 after Dragonborn and Hearthfire. The add-on puts the Dragonborn in the midst of a battle between a group of ancient vampires and a newly-reformed order of vampire hunters.

The third DLC for Skyrim, Dragonborn, was released for the Xbox 360 on December 4th, 2012, and then on the PC on February 5, 2013 while the PS3 version was released on February 12, 2013. Dragonborn takes place on Solstheim (the island setting of the Morrowind expansion Bloodmoon), and involves the Dragonborn facing off against the very first Dragonborn, who is seeking to return to Tamriel.

On April 15, 2013, Bethesda announced that there would be no further content

for Skyrim, citing that they were moving forward with their next project, but that the game would continue to receive technical support. The Legendary Edition came out on June 4, 2013. It received one more release on September 10, 2013, bundled with the other four games in the series, for PC only.

Somewhat uniquely for a modern game, Skyrim has enjoyed a remarkable longevity for a strictly single player title, long after many of its contemporaries have either been forgotten or set aside for sequels. This is due to two factors: One is a string of re-releases. The first was an Updated Re-release using the version of the engine used in Fallout 4, Skyrim: Special Edition, which was was released for the PlayStation 4, Xbox One, and PC on October 28, 2016. The console versions add support for PC mods, a la Fallout 4, and Steam owners of Skyrim and all its DLCs note through the Legendary Edition or otherwise received a copy of Special Edition for free.

In addition, a teaser of the game appeared in the reveal trailer of Nintendo Switch, complete with trademark message, in October 2016. Both Nintendo and Bethesda confirmed that Skyrim will be headed for the Switch during the Switch presentation event in January 2017. Like the Legendary Edition and Special Edition, the Switch port contains all three DLCs. The Switch version also includes some weapons and armor from The Legend of Zelda: Breath of the Wild. It was released on November 17, 2017, and features amiibo support and motion controls.

At E3 2017, another PS4 version with virtual reality support was announced, titled Skyrim VR. It launched the same date as the Switch version, including all the DLC.

The other factor contributing to Skyrim's long term popularity is its massive modding community. Skyrim is a strong contender for the title of Most Modded Game ever, and its community is still in full swing nearly a decade after release. At the Mod Nexus

, the original version of Skyrim holds the crown for most mods produced, with a total of nearly 64 thousand mods (and if you add in the mods for Special Edition, which on its own is sitting pretty at second place, the total jumps to nearly 90k)! For comparison, Fallout 4 clocks in third place at just around half of that. There are whole YouTube channels that have been extremely successful that are solely devoted to showcasing Skyrim mods. The release of the Special Edition, particularly with it being in a far more stable 64 bitnote The original PC release used 32 bit architecture, which limited the game to using only 4 gigabytes of RAM. This meant that a heavily modded game would eventually become unstable to an almost game breaking degree. gave the modding community a definite shot in the arm, allowing mods to become even more ambitious. A list of troper-recommended mods has been added here.

Additionally, as the support of the regular ("Legendary") edition ended in 2013 with no further expansion packs and updates, support for the Special Edition is still ongoing, with more bugfixes (some of which fix things that mods fixed six years before), and also content, with Creation Club, concurrently released with Fallout 4's version, an entire Microtransaction system and a variety of small quests and items (and some absurdly Game-Breaker enchantments) now added through in-store payments. Fan reaction has been... mixed, and won't be discussed here.

I used to be a troper like you... then I took an arrow in the knee.